The Last Duel comes to 4K and Blu-ray in December 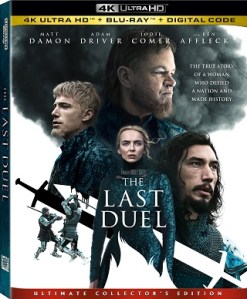 The 2021 film “The Last Duel” is officially coming to 4K UHD Blu-ray and Blu-ray on December 14th, via 20th Century Studios (Disney). The film, directed by Ridley Scott, stars Matt Damon, Adam Driver, Jodie Comer, Harriet Walter, and Ben Affleck. At the time of writing, it is certainly worth noting that this film is “Certified Fresh” over at Rotten Tomatoes.

The tech specs for the 4K UHD Blu-ray include a 2160p video presentation in the 2.39:1 aspect ratio with HDR10 form of high dynamic range and Dolby Atmos sound. Tech specs for the Blu-ray include a 1080p HD video presentation in the 2.39:1 aspect ratio with DTS-HD Master Audio 7.1 lossless surround sound. Both releases will come with a digital code (copy) of the film. The 4K UHD Blu-ray will come in the form of a “combo pack” with its Blu-ray Disc counterpart included.

UPDATE: You can now find the 4K UHD Blu-ray and the Blu-ray available for preorder over at Amazon.

Jodie Comer is spellbinding in this tale of betrayal and vengeance set in 14th century France from visionary filmmaker Ridley Scott. Based on actual events, the film stars Matt Damon and Adam Driver as friends Jean de Carrouges and Jacques Le Gris, two knights who must fight to the death after de Carrouges’s wife (Comer) accuses Le Gris of assault.

Based upon the book by