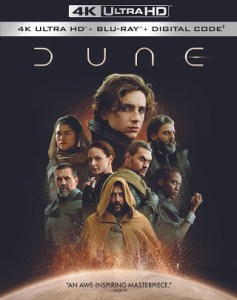 The 2021 version of “Dune” is officially coming to 4K UHD Blu-ray and Blu-ray Disc on January 11th, 2022 via Warner Bros. Home Entertainment. The film, directed by Denis Villeneuve and based on the novels by Frank Herbert, stars Timothée Chalamet, Rebecca Ferguson, Oscar Isaac, Jason Momoa, Stellan Skarsgård, Stephen McKinley Henderson, Josh Brolin, Javier Bardem, Dave Bautista, David Dastmalchian, and Zendaya. It should be noted, at the time of writing, this film is “Certified Fresh” over at Rotten Tomatoes.

The tech specs for the 4K UHD Blu-ray include a 2160p video presentation in the 2.39:1 aspect ratio with HDR10 and Dolby Vision forms of high dynamic range and Dolby Atmos sound. Tech specs for the Blu-ray include a 1080p HD video presentation in the 2.39:1 aspect and Dolby Atmos sound. Both releases will come in the form of a “combo pack” with the 4K getting its Blu-ray counterpart, the Blu-ray getting its DVD counterpart, and a digital code (copy) of each included — compatible with Movies Anywhere. You cannot yet find the 4K UHD Blu-ray or the Blu-ray available for preorder over at Amazon, but placeholder pages are up. However, you can find the 4K UHD Blu-ray and Blu-ray both available for preorder already over at retailers Target and Walmart.

Retailer Target will be getting an exclusive packaging for the Blu-ray Disc version (pictured below) which is now available for preorder. 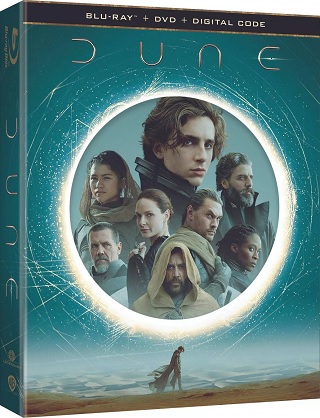 It is known that there will also be an exclusive 4K UHD Blu-ray SteelBook of the film available over at retailer Best Buy (pictured below). That’s listed as coming soon and is not yet a functional preorder listing. 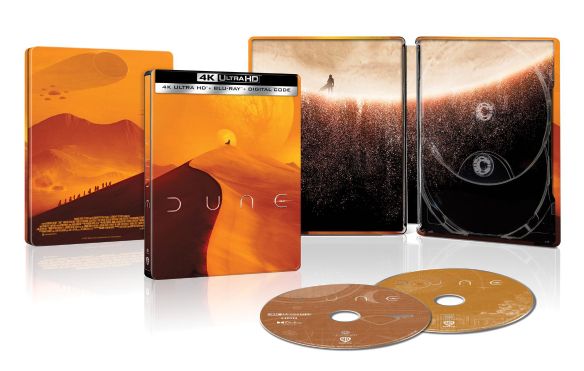 The bonus materials set to be included with each version of the film are listed below.

Further below, after the break, you can find the official trailer for the film and the full announcement about the home video releases.

“An astonishingly vivid vision of the future.”

“Dune” tells the story of Paul Atreides (Timothée Chalamet), a brilliant and gifted young man born into a great destiny beyond his understanding, who must travel to the most dangerous planet in the universe to ensure the future of his family and his people. As malevolent forces explode into conflict over the planet’s exclusive supply of the most precious resource in existence—a commodity capable of unlocking humanity’s greatest potential—only those who can conquer their fear will survive.