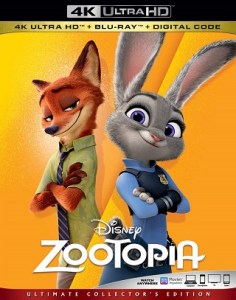 The 2016 animated film “Zootopia“ is coming to 4K UHD Blu-ray on November 5th via Disney, according to retailers. The Academy Award-winning film, co-directed by Byron Howard, Rich Moore, & Jared Bush, featured the voice talents of Ginnifer Goodwin, Jason Bateman, Idris Elba, Jenny Slate, Nate Torrence, Bonnie Hunt, Don Lake, Tommy Chong, J.K. Simmons, Octavia Spencer, Alan Tudyk, and Shakira. The tech specs for the 4K release include a 2160p video presentation in the 2.39:1 aspect ratio with HDR10 form of High Dynamic Range and Dolby Atmos sound. The release will come as a “combo pack” with the Blu-ray Disc and a digital code (copy) of the film. The 4K UHD Blu-ray is now available for preorder over at Amazon. It is worth noting that there will be a 4K UHD Blu-ray Steelbook exclusive release at retailer Best Buy (pictured below). 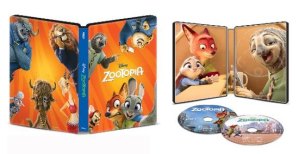