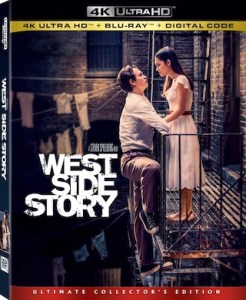 The 2021 film adaptation of “West Side Story” is coming to 4K UHD Blu-ray and Blu-ray on March 15th via 20th Century Studios (Disney).  The film, directed by Steven Spielberg, stars Ansel Elgort, Rachel Zegler, Ariana DeBose, David Alvarez, Rita Moreno, Brian d’Arcy James, Corey Stoll, and Mike Faist.  It is worth noting, that at the time of writing, this film is “Certified Fresh” over at Rotten Tomatoes.

The tech specs for the 4K UHD Blu-ray include a 2160p video presentation in the 2.39:1 aspect ratio with HDR10 form of high dynamic range and Dolby Atmos sound.  Tech specs for the Blu-ray include a 1080p HD video presentation in the 2.39:1 aspect with DTS-HD Master Audio 7.1 lossless surround sound.  The 4K will come in the form of a “combo pack” meaning that it will include its Blu-ray Disc counterpart.  Both the 4K and the Blu-ray will come with a digital code (copy) of the film.

UPDATE:  You can now find the 4K UHD Blu-ray and the Blu-ray available for preorder over at Amazon. 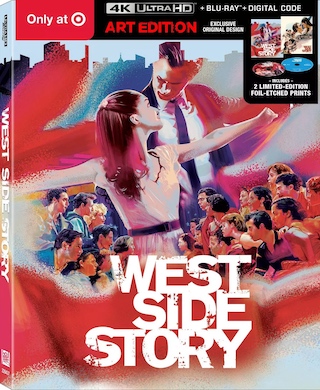 The bonus materials set to be included are over 90 minutes in length which have yet to be fully detailed.  Stay tuned for an update on that when the title gets a full press release — very likely later today.

Further below, after the break, you can find the trailer for the find.