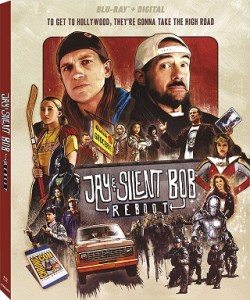 The Next Star-Studded Adventure in the Hilarious Jay & Silent Bob Franchise Arrives on Blu-ray™, DVD, and Digital January 21 from Lionsgate®

SANTA MONICA, CA (December 12, 2019) — Everyone’s favorite stoners are back and more hilarious than ever when Jay and Silent Bob Reboot arrives on Blu-ray™ (plus Digital), DVD, Digital, and On Demand January 21 from Lionsgate. From the guys that brought you Clerks, Chasing Amy, and Mallrats, Jason Mewes and Kevin Smith deliver another smash hit with a 94% audience score on Rotten Tomatoes™ full of nostalgia and cameos from the likes of Ben Affleck, Shannon Elizabeth, Chris Hemsworth, Jason Lee, Justin Long, Harley Quinn Smith, and more!

The stoner icons who first hit the screen 25 years ago in Clerks are back, bringing high times and hilarity in the newest star-studded adventure from Kevin Smith’s legendary franchise. When Jay and Silent Bob discover that Hollywood is rebooting an old movie based on them, it’s game on, as the clueless duo embark on another cross-country mission to stop the madness all over again! With all-star cameos from Matt Damon, Ben Affleck, Chris Hemsworth, Rosario Dawson, Melissa Benoist, Joe Manganiello, Molly Shannon, and more, this is the kickass comedy reboot you’ve been waiting for.