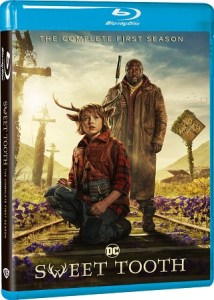 Tech specs for the release include a 1080p HD video presentation in the 2.20:1 aspect ratio and a lossless 5.1 surround mix — presumably in DTS-HD Master Audio but yet to be confirmed.  You can now find the Blu-ray finally available for preorder over at Amazon.  There will be no bonus materials included with this release.

Further below, after the break, you can find the full details about this upcoming home video release of the show’s first season.

BURBANK, CA – Produced by Team Downey and writer/director Jim Mickle, and based on the comics from DC, Sweet Tooth: The Complete First Season, arrives on Blu-Ray and DVD October 11, 2022 from Warner Bros. Home Entertainment. Sweet Tooth: The Complete First Season features all eight heartfelt episodes from the first season and will be available on Blu-ray and DVD courtesy of Warner Archive Collection. Warner Archive Blu-ray and DVD releases are easily found at www.warnerarchive.com and on your favorite online retailer sites. The title is also available to own on Digital via purchase from all major digital retailers.

The end of our world is the beginning of his. Ten years ago “The Great Crumble” wreaked havoc on the world and led to the mysterious emergence of hybrids — babies born part human, part animal. Unsure if hybrids are the cause or result of the virus, many humans fear and hunt them. After a decade of living safely in his secluded forest home, a sheltered hybrid deer-boy named Gus unexpectedly befriends a wandering loner named Jepperd. Together Gus and the Big Man set out on an extraordinary adventure across what’s left of America in search of answers — about Gus’s origins, Jepperd’s past, and the true meaning of home. But their story is full of unexpected allies and enemies, and Gus quickly learns the lush, dangerous world outside the forest is more complex than he ever could have imagined.