1996 film The Craft gets 4K Collector’s Edition in May 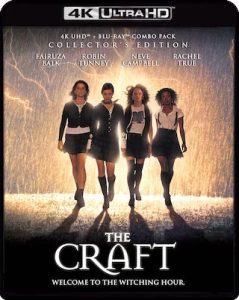 This comes from a new 4K restoration done by Sony.  The tech specs for the 4K UHD Blu-ray include a 2160p video presentation in the 1.85:1 aspect ratio with presumably HDR10 form of high dynamic range and a lossless 5.1 surround sound mix, although not yet confirmed.  The release will come in the form of a “combo pack” meaning that it will include its Blu-ray Disc counterpart.  You can find the 4K UHD Blu-ray Collector’s Edition available for preorder over at Amazon or directly via ShoutFactory.com where you’ll get an exclusive poster (while supplies last).

The details and bonus materials set to be included on the 2-disc set are listed below.