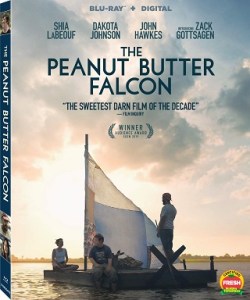 The Peanut Butter Falcon follows Zak (Zack Gottsagen), a young man with Down syndrome who runs away from a residential nursing home to fulfill his dream of attending the pro wrestling school of his idol, The Salt Water Redneck (Thomas Haden Church). On the road, Zak meets Tyler (Shia LaBeouf), a small-time outlaw who becomes Zak’s unlikely coach and ally. Together, they set out on a wild, life-changing journey and try to convince Eleanor (Dakota Johnson), a kind nursing-home employee charged with bringing Zak back, to join them.

Rating: PG-13 for thematic content, language throughout, some violence and smoking.