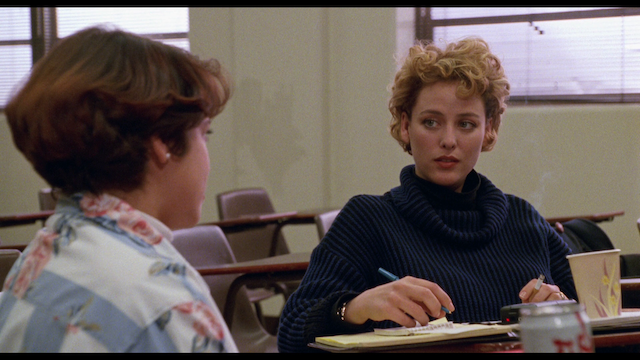 “Candyman” was a psychological thriller / horror film from 1992, written & directed by Bernard Rose. The story for the screenplay was adapted from a short story (“The Forbidden”) written by Clive Barker that can be found in volume 5 of his “Books of Blood“ series.

The protagonist here is a grad student at the University of Illinois named “Helen” (Virginia Madsen) that is researching urban legends, with her fellow grad student “Bernadette” (Kasi Lemmons). As the film starts out we are listening (along with Helen) as one of the student volunteers is telling her a story about an urban legend she has heard of. The story she tells involves a teenage girl babysitting, her boyfriend arriving, and her deciding to get a scare out of him by saying “Candyman” five times into the mirror, which is supposed to summon him. The female student telling Helen this story ends basically saying that the girl was killed because she decided to say his name the fifth (and final) time. This leaves Helen very intrigued, so she tells Bernadette about the story.

Helen is married to a professor at the college, “Trevor” (Xander Berkeley), and it’s become quite obvious that he may be sleeping with on of his female students. So, it’s safe to say that the relationship between Helen and her husband isn’t really all too good. Helen seems determined to find out more about this urban legend called the “Candyman” and manages to get another story from one of the cleaning ladies at the college. Yet another horrifying tale is given, and a location of where it happened as well. This is one rabbit hole that our protagonist is about to dive down, and starts to leave her feeling like she’s gone “through the looking glass” so-to-speak.

I will not go into complete detail here of what all exactly happens, as to avoid dishing out “spoilers” for those who have never seen the film, but let’s just say that this boogeyman type of urban legend turns out to be real. The tortured soul is the result of a man who died a tragic death and was known as the “Candyman” (Tony Todd), that (now in his summoned form) has a hook for his hand. He’s a pretty damn angry guy and with reason to be, to say the least. It’s lastly worth noting that the film was executive produced by Clive Barker and features memorable performances from Vanessa Williams (as “Anne-Marie”), DeJuan Guy (“Jake”), Marianna Elliott (“Clara”), and Ted Raimi (“Billy”). 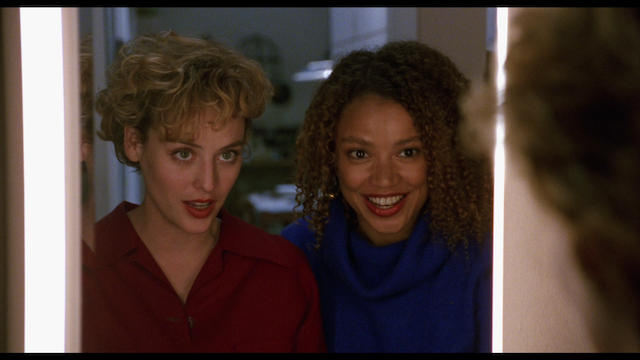 According to the technical specifications listed on IMDb this was shot on 35MM film using Panavision cameras. The movie is presented in the 1.85:1 aspect ratio, as originally theatrically intended. The 2-Disc “Collector’s Edition” set includes both the theatrical cut and the UNRATED cut, with each presented on a separate Blu-ray Disc.

I’ll be primarily covering just the theatrical version in this review, and discussing the unrated cut video & audio quality further below in the bonus materials section.

First thing you’ll notice visually here is an incredible amount of detail to be found in this restoration, just the opening credits and first bit of the film should leave you very impressed. The amount of detail found in closeups is at times incredible. Shots of the bees early on can show that off, as do close ups of actors’ faces. The film grain has been left fully intact, remaining nicely visible throughout. In terms of preservation, it is very nice to see how a film of this age and popularity has been treated.

The color palette definitely can be vibrant at times with brighter colors like red and blue coming across very nicely, as well seeming correct. Flesh tones also appear accurately here, and the black level seems to be solid. There are some occasional tiny bits of dirt or light scratches that have been left on the film print in a few (very short) scenes, but it does not at all prove to be bothersome. In fact, this gives it more of the natural feel it should have.

My first impression of this was that of a jaw-dropping reaction. It looks great, and I do mean great. To get really technical here, this Blu-ray runs almost constantly around 37Mbps in terms of video bitrate (using the AVC codec) – which is rather impressive. They certainly have done this 1992 film justice, as it delivers an absolutely impressive high definition presentation, worthy of a perfect rating for video quality. 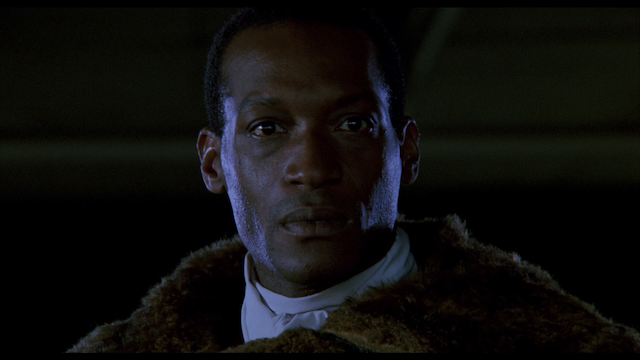 Audio here is presented in DTS-HD 5.1 Master Audio and DTS-HD 2.0 Master Audio Stereo for both versions. During its theatrical run this received a Dolby mix, so it translates well over to a surround (5.1) lossless mix. It’s very much worth noting, as it is audio related, that the writer/director actually discusses how limited he felt that they were with just a Dolby sound mix while talking on the new audio commentary included on this release.

I’ll being only covering the 5.1 mix and strictly the theatrical cut here in this review, unless otherwise noted further below. The film’s hauntingly creepy original Score, done by Philip Glass, gets nicely delivered from primarily the front left and right channel speakers, with a nice amount of rear channel presence and occasionally enough bass to give the subwoofer some play. Dialogue here gets a spot-on delivery from the center channel speaker.

When the intense moments arrive, as the film progresses, you will appreciate this lossless 5.1 mix. It can really have some downright wild bits to the overall audio presentation we get here (via theatrical cut) of the film. It’s enough to do not only the film but also the genres of horror and psychological thriller justice as well, in terms of audio quality.

Early on in the film I could tell that this 5.1 mix can be quiet at times but then build all the way up to something that gives you the chills, and that is much thanks to the original Score being delivered so nicely. The director was right that they were limited by a simple Dolby mix, and now we get a nice lossless 5.1 mix that proves to be much more solid, and offers up some oomph at times it wants to build a scare. For instance, when “Candyman” talks his voice is downright creepy as hell and also seems a bit larger than life, much thanks to use of the subwoofer and center channel together. His voice can get presence not just in the center channel at first, but at times his voice echoes throughout rear, and then front channel speakers. A decent amount of bass can be heard during said sequence.

Things start to get a bit more intense during the latter half of the film. The first half of the film doesn’t really come across as the best part to go rating the audio quality based on. Psychological thrillers (like this) can actually do pretty well in surround, and this is no exception. In terms of audio, this 5.1 lossless mix is overall very solid, and does a great job in delivering some climactic moments that might help to offer up a fright. It’s not the most intense mix that I have ever heard, admittedly, but it has its moments where it can be somewhat impressive. 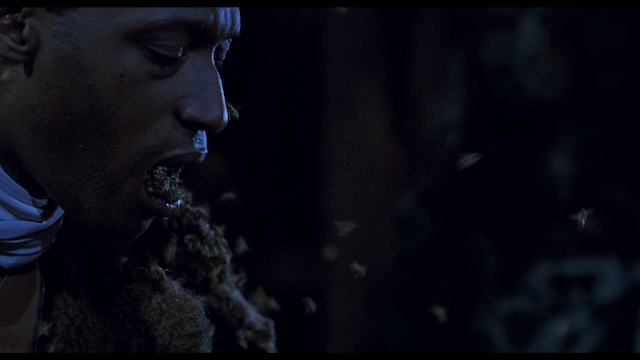 Bonus materials on this release are all presented in 1080p HD video with Dolby Digital 2.0 Stereo sound (unless otherwise noted below) and span across the 2-Disc set.

Overall the bonus materials that you get here prove to be extremely impressive. Not only do we get all the previous DVD extras ported over (an hour in length), but we also get loads of new interviews (over an hour and a half in length) and two new audio commentary tracks as well – for the theatrical cut. This a damn near perfect set of supplemental material. Getting the unrated cut of the film included is just the right touch. This is going to leave “Candyman” fans very happy. 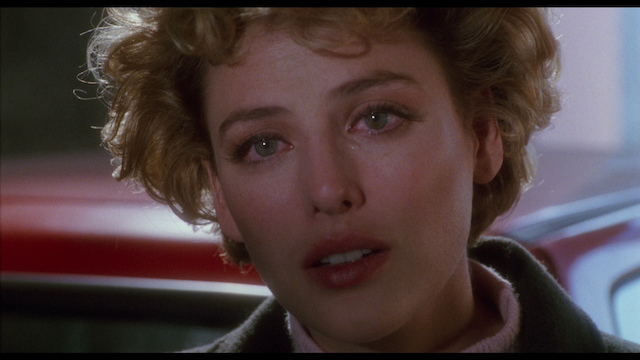 Okay, I’m fine: nothing happened. It’s just urban legend afterall, or is it? Oh, wait, I wasn’t looking into a mirror. Joking aside, in closing: looking back on this 1992 psychological horror film, it’s safe to say that it has developed a large fan base over the past decades, and this release will only help further. Sorry, Tony Todd, but a whole new generation of horror fans are going to be calling you this character now, if they aren’t already. Is that such a bad thing? I don’t think so.

This long-awaited “Collector’s Edition” of the film on Blu-ray comes in a 2-Disc set that includes both the theatrical cut and the unrated cut of the film, with each presented on a separate Blu-ray. The theatrical version gets the best video transfer, as it was supervised & approved by the writer/director of the film. The unrated cut has a few points with different source material for some scenes, but it still proves to be worth the watch for fans and offers up a very impressive video presentation itself.

After you’ve finished watching the film you’ll have a whole lot of new bonus materials to keep you entertained, as well as a lot of the original DVD extras and such ported over. It’s become something that we expect on Scream Factory “Collector’s Edition” Blu-ray releases: absolute quality bonus materials, excellent new artwork, slipcovers, and the reversible cover art. It’s A-OK in terms of supplemental materials on the discs in digital form and with the physical bonus materials, as described.

This is a MUST-HAVE Blu-ray release for any fan of the film. You’re getting two versions of the film and a whole lot of extras, most of which are new and were specifically created for this release.