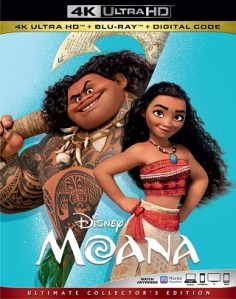 The 2016 animated film “Moana“ is coming to 4K UHD Blu-ray on November 5th via Disney, according to retailers. The Academy Award-nominated film, co-directed by Ron Clements, John Musker, Don Hall, & Chris Williams, featured the voice talents of Auli’i Cravalho, Dwayne Johnson, Rachel House, Temuera Morrison, Jemaine Clement, Nicole Scherzinger, and Alan Tudyk. The tech specs for the 4K release include a 2160p video presentation in the 2.39:1 aspect ratio with the HDR10 form of High Dynamic Range and Dolby Atmos sound. The release will come as a “combo pack” with the Blu-ray Disc and a digital code (copy) of the film. The 4K UHD Blu-ray is now available for preorder over at Amazon. It is worth noting that there will be a 4K UHD Blu-ray Steelbook exclusive release at retailer Best Buy (pictured below). 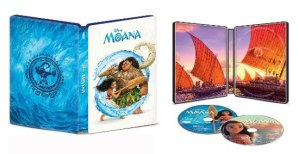