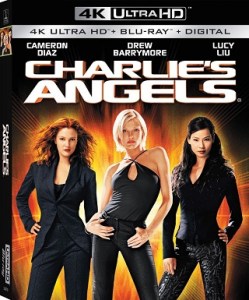 CHARLIE’S ANGELS (2000)
Cameron Diaz, Drew Barrymore and Lucy Liu star as the captivating crime-fighting trio who are masters of disguise, espionage and martial arts. When a devious mastermind embroils them in a plot to destroy individual privacy, the Angels, aided by their loyal sidekick Bosley (Bill Murray), set out to bring down the bad guys. But when a terrible secret is revealed, it makes the Angels targets for assassination.

CHARLIE’S ANGELS: FULL THROTTLE
The “Angels”, three investigative agents (Barrymore, Diaz and Liu) who work for the Charles Townsend Detective Agency, return for another high-octane series of adventures as they investigate the theft of a database of witness protection profiles, after five of the people on the list are murdered. They’re aided by a new Bosley (Bernie Mac), in an adventure which pits them against a “fallen angel” (Moore), their old nemesis, the Thin Man (Glover), and others.