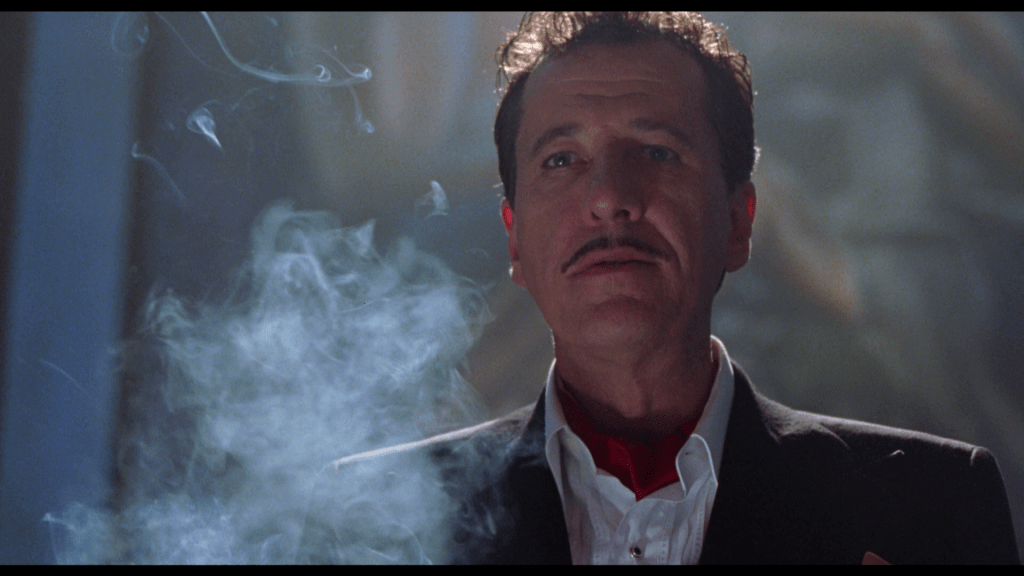 “House on Haunted Hill” from 1999 was a remake of the horror classic from 1959 (of the same title) that starred Vincent Price. This remake was produced by Robert Zemeckis (“Back to the Future” trilogy, “Forrest Gump”) and Joel Silver (“Predator”). The film was directed by William Malone, best known for later directing the films “Feardotcom” (2002) and “Parasomnia” (2008). In fairness to his horror credits it is worth noting that Malone did direct two episodes of the “Tales from the Crypt“ TV series, back in 1994 and 1996. He also directed three episodes of the “Freddy’s Nightmares“ TV series, back in 1989 and 1990.

The story takes some obvious similarities from the original film here, but I’ll describe it just as it is, for those who have never seen the original. So, this eccentric millionaire named “Stephen Price” (Geoffrey Rush) gets a phone call one day from his wife “Evelyn” (Famke Janssen) telling him what she wants, in a typical spoiled rich wife fashion, for her birthday party. After watching a TV show that featured a place called “The House on Haunted Hill” she has decided that she wants her husband to let her invite some of her friends to the house to stay for one night. In spite of his wife’s corny plans, Price makes some drastic changes to the circumstances and guest list. First he changes all the guests to different people, and then decides to make it interesting by offering 1 million dollars to each guest if they can actually survive the night locked in this house that has a dark history.

It’s worth noting two things. First, the husband makes his living scaring people with amusement park rides, so the fact he’s organized this comes as a bit suspicious – especially to his wife. Second, it’s quite obvious within moments that this husband and wife damn well hate one another, and being trapped in a house together you’d expect them to possibly attempt to kill one another – if the ghosts don’t get to do it first. The five guests that we end up getting to attend the sick and twisted little birthday party arrive in black hearses up the driveway to the “House on Haunted Hill” and include: “Eddie” (Taye Diggs), “Blackburn” (Peter Gallagher), “Sara” (Ali Larter), “Melissa” (Bridgette Wilson), and the house’s current owner “Pritchett” (Chris Kattan).

Admittedly this remake absolutely pales in comparison to the original 1959 film starring Vincent Price, but it does make some efforts to carry over parts from the original’s plot and story. It’s obvious that this remake was done to pay some homage to the original, but honestly failed to be as memorable of a film. The director of the remake even admits that the original plan was for a straight-forward horror film and that they opted for more of combination of horror and (dry sarcastic nature) comedy. The horror falls a bit short in terms of scares in comparison to more extreme films of the genre, but the comedic elements actually prove to be somewhat entertaining at times. Geoffrey Rush and Chris Kattan give two of my favorite performances in the film. 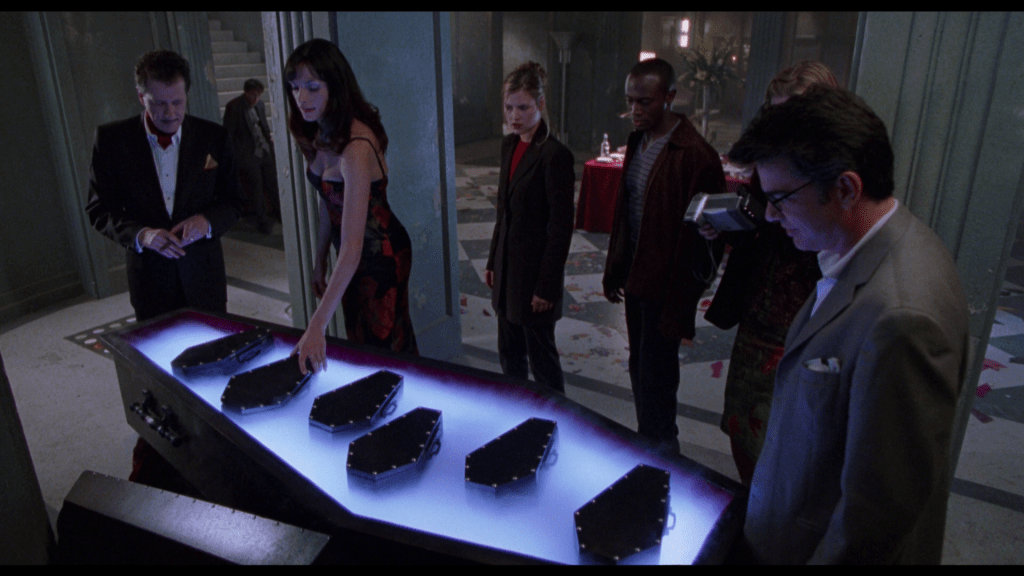 According to the technical specifications listed on IMDb this was shot on 35MM film using Panavision cameras. It is presented in the original 1.85:1 aspect ratio, as shown during its theatrical run. This comes from a new 2K scan of the original film elements.

The film has never been released on Blu-ray Disc, and makes its debut here with this release. It’s hard to believe but the old 2000 DVD release from Warner (that I still own) was the previously only real version of the film to own. Now when you take a look at some of my DVD vs. Blu-ray Screenshot Comparisons (below) you’ll notice there’s a correct aspect ratio (as the DVD was in an incorrect 1.78:1 aspect ratio). You’ll also notice that the color here (on Blu-ray) seems way more realistic and delivers more accurate fleshtones. There’s a large amount of newfound detail here in comparison the to that previous DVD release, as you’d obviously expect. The black level, this time around, is more solid, and the contrast is as intended, as I’ll discuss further below. First though, have a look at the comparisons.

Now, there’s a reason here that this film looked as soft visually, almost dreamlike, and the director has discussed (here on the bonus materials) that they used a process called “flashing” the film negative, where you expose the film to light slightly before putting it in the camera to give it a visual style that comes with a lower contrast as well. As a result of that the film never was supposed to be as dark as it was previously on home video.

There’s a pretty good amount of film grain still there but a bit softer since the film process. This high definition presentation has a nice amount of detail here, especially in closeups. It’s worth noting that some of the digital or optical effects near the end of the film look to be a bit dated by today’s standards, when presented in HD. Overall this offers a solid video presentation that is well worth the 18 year wait to upgrade your DVD, or finally give the film a chance. As usual, Scream Factory delivers in the video quality department. It’s a shame Warner did not ever decide to attempt to even release this on Blu-ray. 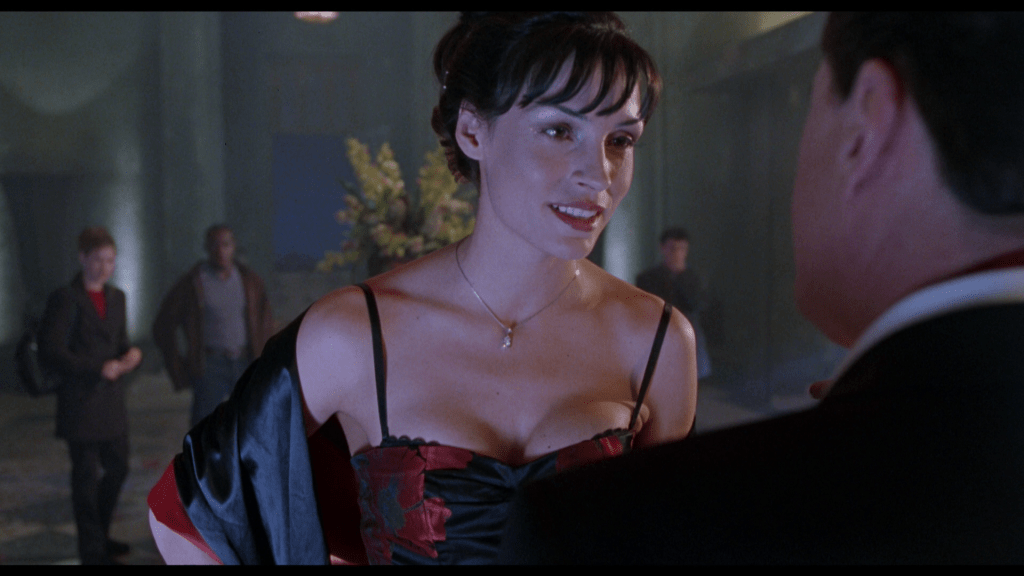 Audio here is presented in DTS-HD 5.1 Master Audio. The original DVD (from 2000) had a Dolby Digital 5.1 mix, so this comes as an improvement in comparison to that release, being in a lossless format. Dialogue is very vital in this film, and is delivered distinctly throughout. At the opening of the film you’ll notice a bit of rear channel presence, and that the 5.1 mix starts to get a bit more intense about 8 minutes in. There’s a pretty nice amount of bass (via the subwoofer) used for the film’s original score during the climactic moments, as well as for the sound effects. The use of the rear channel speakers can be very selective, and tries to help set the vibe by using sound effects and music when necessary to match the intensity of things going on.

It’s almost a bit of a psychological surround mix, more than the traditional mix. Admittedly this is a unique approach to a 5.1 audio presentation, and one intended to emphasize the action and scares more. It does have a good amount of “oomph” to it near the end of the film. It certainly is a solid audio presentation, but isn’t one of the most intense or memorable mixes I’ve ever heard for a horror film. That said, it’s enough to get the job done, and should leave a majority of folks pleased. 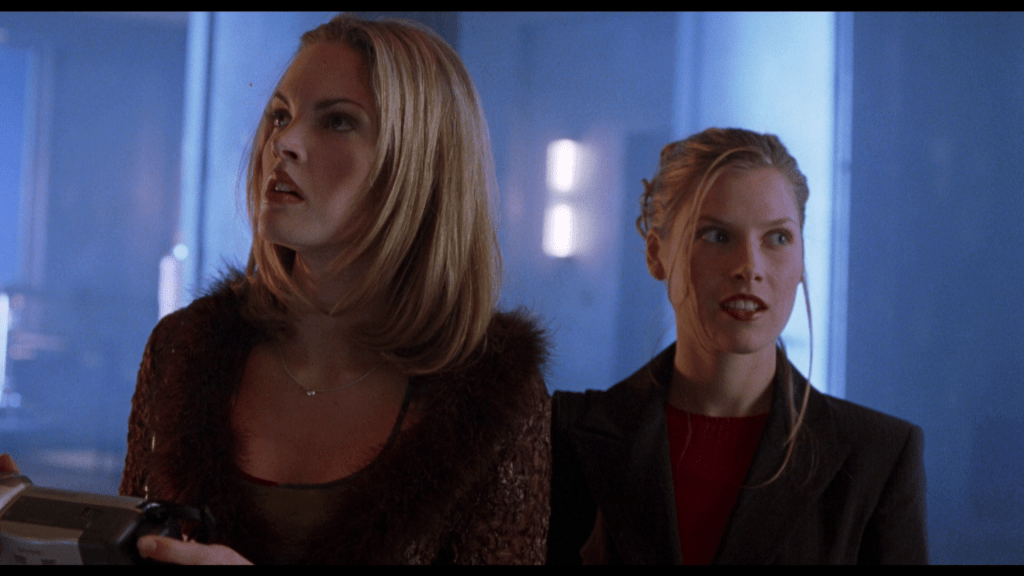 Bonus materials on this release all are presented in 1080p HD video with Dolby Digital 2.0 Stereo sound. They include the following:

Overall the bonus materials prove to be worthwhile and include three new interviews that total up to roughly almost an hour in length. You get all of the DVD bonus materials ported over like the audio commentary from the director, the deleted scenes and vintage featurettes, as well as lots of galleries of photos – that all are this time presented in HD. It’s enough to leave fans of the film pleased with all of the new content, and first time viewers happy with the amount of extras. 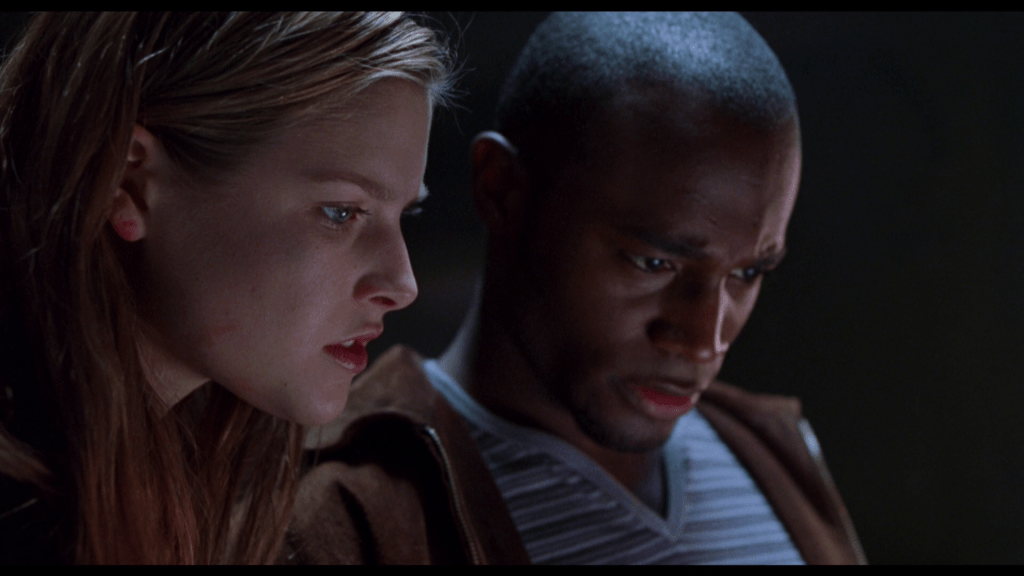 “House on Haunted Hill” in the 1999 remake form was an “OK” film, if you had never seen the original, and you were looking for some light horror and suspense, minus the mystery. If you had seen the original 1959 film and saw this, you undoubtedly felt that it wasn’t nearly as good of a film for its time. That said, this does make its efforts at paying homage to the original, by the main character’s last name being “Price” – as tribute to actor Vincent Price, who starred in the 1959 classic.

This 1999 remake’s biggest flaw is that the attempts at suspense fall a bit short, and most notably it lacks any real mystery as to who might be responsible, and so forth in comparison to that original film. Here, in this 1999 remake, you never see the guests even go to their rooms for the evening, or such as you’d expect for spending the night in the house would go. In fact, they never make it to any rooms, and that’s not even a “spoiler” to tell you, as they just wander around the creepy residence aimlessly, essentially just trying to get killed by the house. It’s just a typical late nineties attempt at psychological horror that lacks any real gore or such. Still, it has its moments with the performances from the cast and some occasional attempts at frights, that prove to be somewhat rewarding. It (as a film) is worth seeing at least once (as with most remakes), but admittedly is not for everyone.

This Blu-ray Disc debut of the film, 18 years after the original DVD release, proves to be a very nice improvement visually and and decent improvement in terms of of sound. The amount of new bonus materials (three interviews) prove to be pretty impressive and it’s nice to see all of the original bonus materials ported over from the DVD release. Scream Factory has definitely done this film justice.