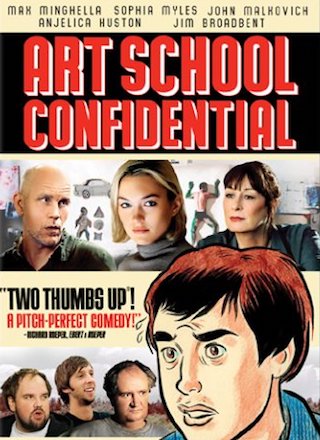 ART SCHOOL CONFIDENTIAL follows talented young artist Jerome Platz (Max Minghella, The Social Network) as he escapes from high school to a tiny East Coast art school. Here the boyish freshman’s ambition is to become the world’s greatest artist, like his hero Picasso. Unfortunately, the beauty and craft of Jerome’s portraiture are not appreciated in an anything-goes art class. Neither his harsh judgments of his classmates’ efforts nor his later attempts to create pseudo-art of his own win him any admirers. But Jerome does attract the attentions of his dream girl, the stunning and sophisticated Audrey (Sophia Myles, Transformers: Age of Extinction), an artist’s model and daughter of a celebrated artist. Rejecting the affectations of the local art scene, Audrey is drawn to Jerome’s sincerity. When Audrey shifts her attention to Jonah (Matt Keeslar, Scream 3), a hunky painter who becomes the school’s latest art star, Jerome is heartbroken. Desperate, he concocts a risky plan to make a name for himself and win her back. From Terry Zwigoff, the director of Ghost World and Bad Santa, Art School Confidential features a stellar supporting cast that includes John Malkovich (In the Line of Fire), Ethan Suplee (Mallrats), Joel David Moore (Avatar), Angelica Huston (The Addams Family), Jim Broadbent (Moulin Rouge!), Nick Swardson (Grandma’s Boy), Adam Scott (Step Brothers) and Scoot McNairy (Argo) in a movie that’s “enjoyable and reprises the same dyspeptic attitude that infused Ghost World” (The Washington Post).