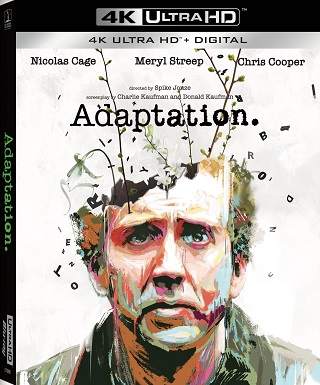 The 2002 film “Adaptation.” is officially coming to 4K UHD Blu-ray on December 6th via Sony Pictures Home Entertainment.  The film, directed by Spike Jonze, was based on a book (“The Orchard Thief”) with the screenplay adaptation written by Charlie Kaufman, and it starred Nicolas Cage, Meryl Streep, Tilda Swinton, and Chris Cooper.  It’s most certainly worth noting, that at the time of writing this, the film is still deemed“Certified Fresh” (all these 20 years later) over at Rotten Tomatoes.

This movie has been newly remastered in 4K from the original camera negative.  The tech specs for the release include a 2160p video presentation in the original 1.85:1 aspect ratio with HDR10 and Dolby Vision forms of high dynamic range and a new Dolby Atmos sound mix as well as the original theatrical mix in a DTS-HD Master Audio 5.1 configuration and even a DTS-HD Master Audio 2.0 Stereo sound mix.  The release will only include a 4K disc and a digital code (copy) of the film.  So, again, there will be no Blu-ray with this release.

You can now find the 4K UHD Blu-ray available for preorder over at retailers Best Buy and Walmart, as well as online retailer Deep Discount.  The bonus materials set to be included with this release are listed below.

Director Spike Jonze delivers a stunningly original comedy that seamlessly blends fictional characters and situations with the lives of real people: obsessive orchid hunter John Laroche (Chris Cooper, in an Academy Award®-winning performance, 2002, Best Supporting Actor), New Yorker journalist Susan Orlean (Meryl Streep), Hollywood screenwriter Charlie Kaufman (Nicolas Cage), and his twin brother, Donald (also Cage). As Charlie struggles to adapt Orlean’s best-selling book “The Orchid Thief,” he writes himself into his own movie. The various stories crash into one another, exploding into a wildly imaginative film. ADAPTATION is at once a hilarious drama and a moving comedy, now celebrating its 20th anniversary.

This 4K UHD release does not include a Blu-ray™