1984 film The Company of Wolves on 4K in November 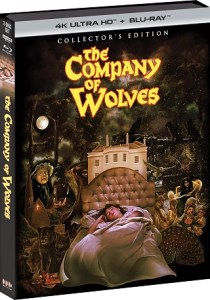 The tech specs for the release have not yet been detailed but you can expect a 2160p video presentation in the 1.66:1 aspect ratio with likely [at least] HDR10 form of high dynamic range.  No word yet on the audio but I’m willing to bet that you can expect at least a lossless Stereo 2.0 mix.  Also, the extras are “currently in progress” so check back later for an update on that as well.  The 2-disc Collector’s Edition release will come in the form of a “combo pack” with its Blu-ray Disc counterpart included.

You can now find the 4K UHD Blu-ray available for preorder over at Amazon as well as directly via the  ShoutFactory.com website, where you’ll get an exclusive poster (while supplies last).