Monty Python’s The Meaning of Life comes to 4K 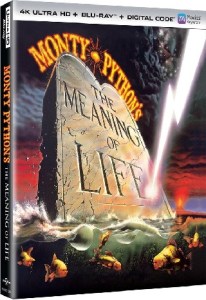 The tech specs for the release include a 2160p video presentation in the 1.85:1 aspect ratio with HDR10 form of high dynamic range and DTS:X immersive sound on a BD-100 disc.  The release will come in the form of a “combo pack” with its Blu-ray Disc counterpart as well as a digital code (copy) of the film [via Movies Anywhere] included.

Also, you can find a 4K 2160p video extended preview of the film on YouTube that Universal posted earlier this month as a tease for the upcoming 4K UHD Blu-ray release.