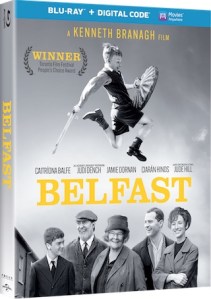 The 2021 film “Belfast“ is officially coming to Blu-ray on March 1st via Universal Studios Home Entertainment.  The film, written & directed by Kenneth Branagh, stars Caitríona Balfe, Judi Dench, Jamie Dornan, Ciarán Hinds, Colin Morgan, and Jude Hill.  It is most certainly worth noting, at the time of writing, this film is “Certified Fresh” over at Rotten Tomatoes.

The tech specs for the Blu-ray include a Black & White 1080p HD video presentation in the 1.85:1 aspect ratio with DTS-HD Master Audio 5.1 lossless surround sound on a BD-50 disc.  The release will come with a digital code (copy) of the film compatible with Movies Anywhere.  You can now find the Blu-ray available for preorder over at Amazon.  The bonus materials that are set to be included with this release are listed below.

Further below, after the break, you can find the trailer for the film and the full announcement regarding the home video release(s).

NOMINATED FOR 11 CRITIC’S CHOICE AWARDS® INCLUDING BEST PICTURE, THE EXTRAORDINARY COMING-OF-AGE STORY IS AVAILABLE TO OWN FOR THE FIRST TIME WITH NEVER-BEFORE-SEEN BONUS CONTENT AND AN EXCLUSIVE ALTERNATE ENDING

OWN IT ON DIGITAL FEBRUARY 8, 2022
BLU-RAYTM AND DVD MARCH 1, 2022
FROM UNIVERSAL PICTURES HOME ENTERTAINMENT

“The best picture of the year, no doubt” – Pete Hammond, Deadline

Universal City, California, February 1, 2022 – An intimate and moving story of childhood memories hailed by critics as a “soaring cinematic triumph” (Mark Johnson, Awards Daily), BELFAST is available to own for the first time on Digital February 8, 2022 and on Blu-ray™, DVD and On Demand March 1, 2022 from Universal Pictures Home Entertainment. Written and directed by Academy Award® nominee Kenneth Branagh (Henry V), BELFAST on Blu-ray™, DVD and Digital comes packed with all-new bonus content including a heart-warming alternate ending featuring Kenneth Branagh, deleted scenes, and featurettes about Branagh’s brilliant vision, the characters, and spectacular filming locations, plus personal childhood memories from the cast drawing audiences deeper into the authentic story about the power of family and community.

BELFAST is a poignant story of love, laughter and loss in one boy’s childhood amid the music and social tumult of the late 1960s. Buddy’s family lives in a largely Protestant district with a few Catholic families, but one day his community and everything he thought he understood about life is suddenly turned upside down. Buddy’s family gets caught in the mayhem and must decide to stay or leave the only place they have ever called home. Through it all, his passionate parents (Balfe and Dornan) and quick-witted grandparents (Dench and Hinds) keep the joy alive through music and the magic of movies in this feel-good story that reminds us that no matter how far you go, you never forget where you came from.

BELFAST will be available on Blu-ray™, DVD and Digital.