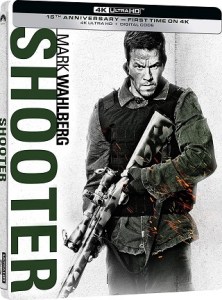 The 2007 film “Shooter“ is coming to 4K UHD Blu-ray for the first time, in a Limited Edition SteelBook to celebrate its 15th Anniversary, on March 15th, 2022 via Paramount Home Entertainment, according to Amazon. The film, directed by Antoine Fuqua, starred Mark Wahlberg, Michael Peña, Danny Glover, Kate Mara, and Elias Koteas.

The release will come with just the 4K UHD Blu-ray Disc and not a Blu-ray. It will also include a digital code (copy) of the film. You can now find the 4K UHD Blu-ray SteelBook available for preorder over at Amazon. No word yet on what bonus materials will be included. Stay tuned for further details regarding this upcoming release.