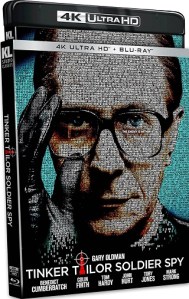 The 2011 film adaptation of “Tinker Tailor Soldier Spy” starring Gary Oldman is coming to 4K UHD Blu-ray on February 22nd, 2022 via KL Studio Classics. The film, directed by Tomas Alfredson, co-starred Benedict Cumberbatch, Colin Firth, Tom Hardy, Toby Jones, Mark Strong, and John Hurt. It is most certainly worth noting that, aside from its three Academy Award nominations, this film was originally very well-received by critics. In fact, still to this date and at the time of writing, this still carries a “Certified Fresh” rating over at Rotten Tomatoes. However, it doesn’t need that badge stuck on the cover art, now, does it? Classy, Kino Lorber.

The movie has received a new 4K restoration, quoted below.

The tech specs for the 4K UHD Blu-ray release include a 2160p video presentation in the 2.35:1 aspect ratio with HDR10 form of high dynamic range along with a 5.1 lossless surround sound and 2.0 Stereo sound mix, in a lossless form as well, on a BD-100 disc. The 4K UHD Blu-ray will come in the form of a “combo pack” meaning that it will include its Blu-ray Disc counterpart. You can now find the 4K UHD Blu-ray available for preorder over at Amazon. You can also preorder the 4K UHD Blu-ray via Kino Lorber‘s website. The bonus materials set to be included with the releases, along with some details specific to the 4K release, are listed below.