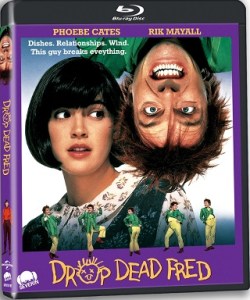 The 1991 film “Drop Dead Fred“ is officially coming to Blu-ray Disc on September 28th via Severin Films, distributed by MVD Entertainment Group. The film, directed by Ate de Jong, starred Phoebe Cates, Rik Mayall, Marsha Mason, Tim Matheson, and Carrie Fisher. The tech specs for the release include a 1080p HD video presentation in the 1.85:1 aspect ratio from a new 2K scan (as quoted below) and Stereo sound, likely in a lossless format.

“… now scanned in 2K with all-new Special Features for the first time ever in America.”

You can now find the Blu-ray available for preorder over at Amazon. A rather extensive set of bonus materials set to be included with this release of the film are listed below.