Another 48 Hrs. gets a Paramount Presents Blu-ray in July 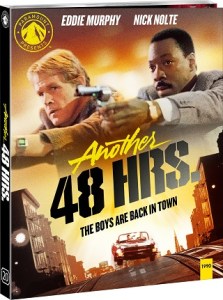 The 1990 sequel “Another 48 Hrs.” starring Eddie Murphy and Nick Nolte is officially getting a new remastered Blu-ray Disc release from Paramount Presents on July 6th. This release will be spine #20 in the series. The film, directed by Walter Hill, co-starred Brion James, Kevin Tighe, Ed O’Ross, Andrew Divoff, Bernie Casey, Brent Jennings, and Tisha Campbell. This movie has received a new 4K restoration. The tech specs for the release have not yet been detailed but you can very likely expect a 1080p HD presentation with lossless 5.1 surround sound. The release will come with a digital copy of the film. This is the very first time the film has been available on the Blu-ray format stateside.

UPDATE: You can now find the Paramount Presents Blu-ray listed for preorder over at Amazon.