1997 film Gattaca will get a standard 4K release in June 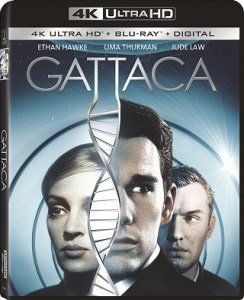 The 1997 film “Gattaca” will be getting a standard 4K UHD Blu-ray release on June 15th via Sony Pictures Home Entertainment. This news, from an early retailer listing, comes not even a month after the film just received a limited edition 4K UHD Blu-ray SteelBook release — which you can read about here. This release will be identical except it will come in a standard black 4K case. You can now find the standard 4K UHD Blu-ray available for preorder over at Amazon.

The film, written & directed by Andrew Niccol, starred Ethan Hawke, Uma Thurman, Jude Law, Gore Vidal, Xander Berkeley, Jayne Brook, Maya Rudolph, Blair Underwood, and Elias Koteas. This movie has been newly remastered in 4K from the original camera negative. The tech specs for the 4K release include a 2160p presentation in the 2.40:1 aspect ratio with HDR10 form of high dynamic range and Dolby Atmos as well as DTS-HD Master Audio 5.1 surround sound. The release will come in the form of a “combo pack” meaning it will include its Blu-ray Disc counterpart and a digital code (copy) of the film. The bonus materials included with the 4K release are listed below.

And, if you’re wanting to check out some Blu-ray VS. 4K Screenshots Comparison stills and the video for this film, look no further.