1997 film Gattaca is getting a 4K SteelBook release in March 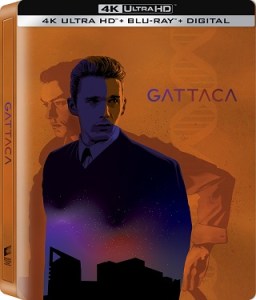 The 1997 film “Gattaca” is officially coming to 4K UHD Blu-ray in a limited edition SteelBook release on March 23rd, 2021, via Sony Pictures Home Entertainment. The film, written & directed by Andrew Niccol, starred Ethan Hawke, Uma Thurman, Jude Law, Gore Vidal, Xander Berkeley, Jayne Brook, Maya Rudolph, Blair Underwood, and Elias Koteas. This movie has been newly remastered in 4K from the original camera negative. The tech specs for the 4K release include a 2160p presentation in the 2.40:1 aspect ratio with HDR10 form of high dynamic range and Dolby Atmos as well as DTS-HD Master Audio 5.1 surround sound. UPDATE: This title on 4K UHD Blu-ray SteelBook is now available to preorder over at Amazon. The release will come in the form of a “combo pack” meaning it will include its Blu-ray Disc counterpart and a digital code (copy) of the film. The bonus materials set to be included with the 4K release are listed below.

Further below, after the break, you can find the full announcement regarding the upcoming 4K UHD Blu-ray SteelBook release of this film.

Ethan Hawke, Uma Thurman, Alan Arkin and Jude Law star in this engrossing sci-fi thriller about an all-too-human man who dares to defy a system obsessed with genetic perfection. Hawke stars as Vincent, an “In-Valid” who assumes the identity of a member of the genetic elite to pursue his goal of traveling into space with the Gattaca Aerospace Corporation. However, a week before his mission, a murder marks Vincent as a suspect. With a relentless investigator in pursuit and the colleague he has fallen in love with beginning to suspect his deception, Vincent’s dreams steadily unravel.

Written and Directed By: Andrew Niccol

Rating: PG-13 for brief violent images, language and some sexuality