“47 Ronin” gets a standard 4K release in May 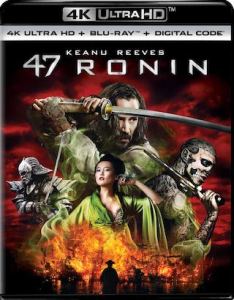 The 2013 film “47 Ronin” starring Keanu Reeves seems to be coming to 4K UHD Blu-ray on May 5th, via Universal, according to retailers. The movie, directed by Carl Rinsch, co-starred Hiroyuki Sanada, Tadanobu Asano, Ko Shibasaki, and Min Tanaka. The tech specs for the 4K release include video in the 2.40:1 aspect with HDR10 form of High Dynamic Range and DTS:X sound. The release will come in the form of a “combo pack” with a Blu-ray Disc and digital code (copy) of the film included. You can now find the 4K UHD Blu-ray listed for preorder over at Amazon. The bonus materials set to be included are listed below.

And lastly, while I’m discussing the film on 4K, it seems important to remind you as I had previously reported to you last week, it will also be getting an exclusive 4K UHD Blu-ray SteelBook release over at retailer Best Buy (pictured below).