“The Current War” arrives on Blu-ray in March 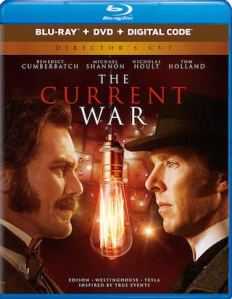 The 2019 Director’s Cut of “The Current War“ is coming to Blu-ray Disc on March 31st, via Universal, according to retail sources. The film, directed by Alfonso Gomez-Rejon and executive produced by Martin Scorsese, featured a cast including Benedict Cumberbatch, Michael Shannon, Nicholas Hoult, Matthew Macfadyen, Tuppence Middleton, and Tom Holland. The tech specs for the Blu-ray include 1080p HD video in the 2.39:1 aspect ratio with DTS-HD Master Audio 5.1 sound on a BD-50 (50 gigabytes dual-layered) disc. The release will come in the form of a “combo pack” with a DVD and a digital code (copy) of the film included. You can now find the Blu-ray listed for preorder over at Amazon. The bonus materials set to be included on the release are listed below.