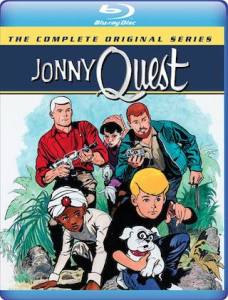 TV’s first animated action-adventure series is about to take you on a breathless ride. All 26 episodes charting the fantastic exploits of brave and brainy 11-year-old Jonathan Quest are yours in a 3-disc set, as originally first broadcast in prime-time on ABC-TV during the 1964-65 season. Unlike the outrageous fantasy plots of cartoons that preceded it, Jonny Quest drew on science and detective-style logic to solve mysteries and apprehend sophisticated villains. Viewers were transported to exotic locales as Jonny’s dad, Dr. Benton Quest, tackled each new government assignment, aided by ex-agent “Race” Bannon, Indian boy Hadji, family bulldog Bandit… and, of course, his fearless son Jonny.