RUMOR: “The Upside” with Kevin Hart and Bryan Cranston on Blu-ray in May 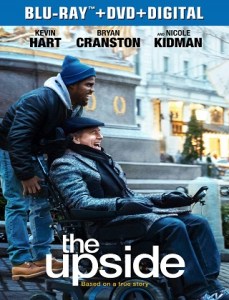 The 2019 film “The Upside“ starring Kevin Hart and Bryan Cranston is rumored to be coming to Blu-ray Disc on May 21st via Universal, according to early alerts to retailers. I am only saying this is a rumor as the studio has not yet officially announced this title. The film, directed by Neil Burger, co-stars Nicole Kidman, Aja Naomi King, Jahi Di’Allo Winston, Genevieve Angelson, Golshifteh Farahani, Tate Donovan, and Julianna Margulies. There is no info yet regarding tech specs or bonus materials set to be included on the release. It is known that it will come in the form of a “combo pack” with a DVD and digital copy of the film included. The Blu-ray is available to pre-order over at Amazon and even has a placeholder over at Best Buy (with the release date listed). Stay tuned for any updates on this release.