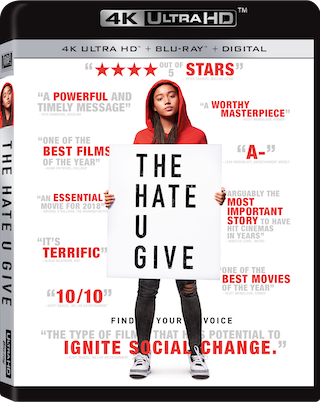 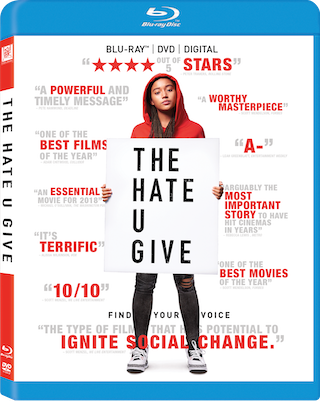 LET YOUR LIGHT SHINE. LET YOUR VOICE BE HEARD.

THE HATE U GIVE ARRIVES ON DIGITAL ON JANUARY 8 AND
4K ULTRA HD™, BLU-RAY™ AND DVD ON JANUARY 22

THE HATE U GIVE

Starr Carter is constantly switching between two worlds: the poor, mostly black, neighborhood where she lives and the rich, mostly white, prep school she attends. The uneasy balance between these worlds is shattered when Starr witnesses the fatal shooting of her childhood best friend Khalil at the hands of a police officer.  Now, facing pressures from all sides of the community, Starr must find her voice and stand up for what’s right. THE HATE U GIVE is based on the critically acclaimed New York Times bestseller by Angie Thomas and stars Amandla Stenberg as Starr, with Regina Hall, Russell Hornsby, Issa Rae, KJ Apa, Algee Smith, Sabrina Carpenter, Common and Anthony Mackie.

Certified Fresh™ on Rotten Tomatoes®, THE HATE U GIVE arrives on Movies Anywhere™ January 8 and 4K Ultra HD™, Blu-rayTM and DVD on January 22.

THE HATE U GIVE 4K Ultra HD™ and Blu-ray Technical Specifications: