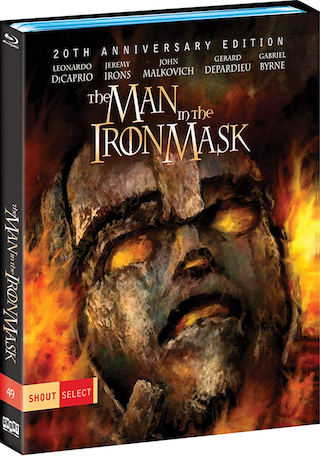 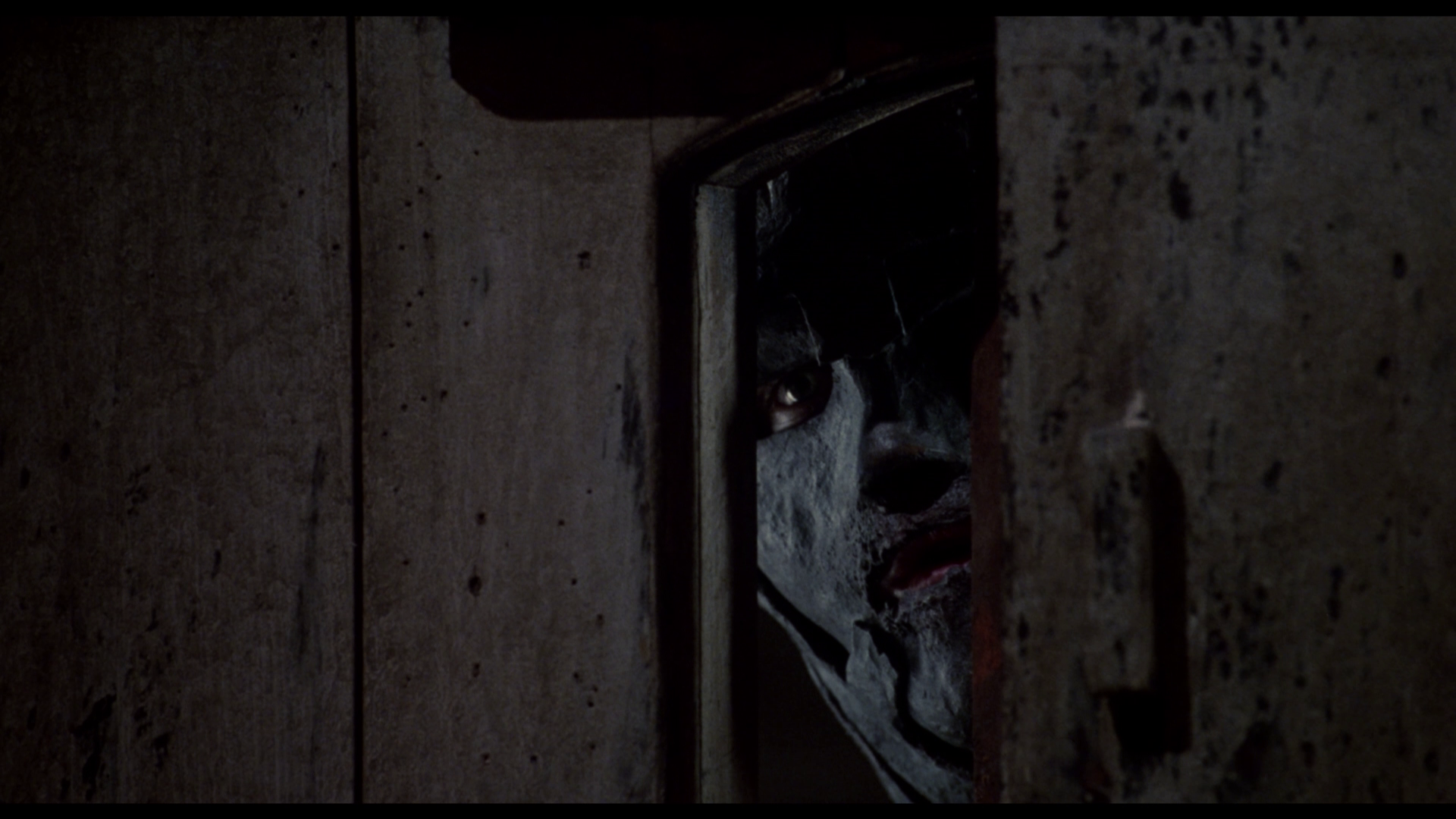 “The Man in the Iron Mask” is based loosely on history, involving the French King Louis XIV, as well as the final novel in the “D’Artagnan Romances” written by Alexandre Dumas. The characters from that novel (“The Vicomte de Bragelonne”) are used here as well as the real king of France, and a prisoner that was supposedly the king’s twin brother, referred to as “The Man in the Iron Mask” (from which the film gets its title). The film’s Screenplay was adapted by Randall Wallace, best known for his work on screenplays for films such as “Braveheart” (1995), “Pearl Harbor” (2001), and “We Were Soldiers” (2002). Randall Wallace would make his directorial debut with this film adaptation.

The story is set in Paris, France during the year 1662 and (as mentioned) during the reign of King Louis XIV (played here by Leonardo DiCaprio). The country faces some real problems as the citizens are revolting against the king and a threat of revolution is luring. The King is more focused on womanizing and planning war than he is making sure that the people of his country are happy, as they are starving due to rotten food. This civil unrest causes a group known as the “Jesuit order” to wage revenge on the king with assassination attempts. It’s safe to say that the King was not at all admired by his subjects at this point in time.

Meanwhile, you have the King’s Captain of the Musketeers “D’Artagnan” (Gabriel Byrne) trying to protect his king, while he still is friends with the men known in the novel (also written by Alexandre Dumas) as “The Three Musketeers” that have went their own ways. The musketeers reunite as we see the drunken “Porthos” (Gerard Depardieu) come to visit his old friend “Aramis” (Jeremy Irons) now serving as a priest. The two catch up a tad bit on old times, when they are surprised by a visit from D’Artagnan. Their former musketeer and friend “Athos” (John Malkovich) has fully retired from that lifestyle and is living with his son “Raoul” (Peter Sarsgaard).  Raoul serves in the military and has a beautiful young fiancé named “Christine” (Judith Godreche). Unfortunately for Raoul, the King has an eye for his fiancee and will do whatever it takes to get him out of the picture to try to steal away the man’s would-be bride. This causes some defiant drama between the two friends Athos and D’Artagnan over it, but then word comes that Raoul is to be sent to serve on the front lines during a war. It’s at this point that anger erupts from Athos toward his friend and his King. He promises that if anything happens to his son as a result of this that he will be a sworn enemy against the King and seek revenge.

As all this is going on, with the French country in civil unrest and a power-hungry king letting his people starve, you have another man that he wanted out of the picture a very long time ago, a prisoner in an iron mask, said to be the twin brother to the King. The four musketeers here band together in an alliance to free this man, “Phillippe” (also played by Leonardo DiCaprio) from his wrongful imprisonment, to attempt to replace the King. This sets up our story and the whole plot to this, again loosely based on the Dumas novels and some of French history.

To avoid giving away anymore of the story, I’ll cut this synopsis for the film short. I’ll just say that this proves to be an entertaining and thought provoking film. While it may have its share of historical inaccuracies and such, it still does reflect on the late 1600s in France and the supposed twin brother to the King. The performances given here by DiCaprio, Byrne, Irons, and Malkovich all prove to be memorable. A year earlier Leonardo DiCaprio became a household name (as an actor) co-starring in the film “Titanic” (1997). That star power with the top billed actor would help give this film a bit of a larger audience in the long run. 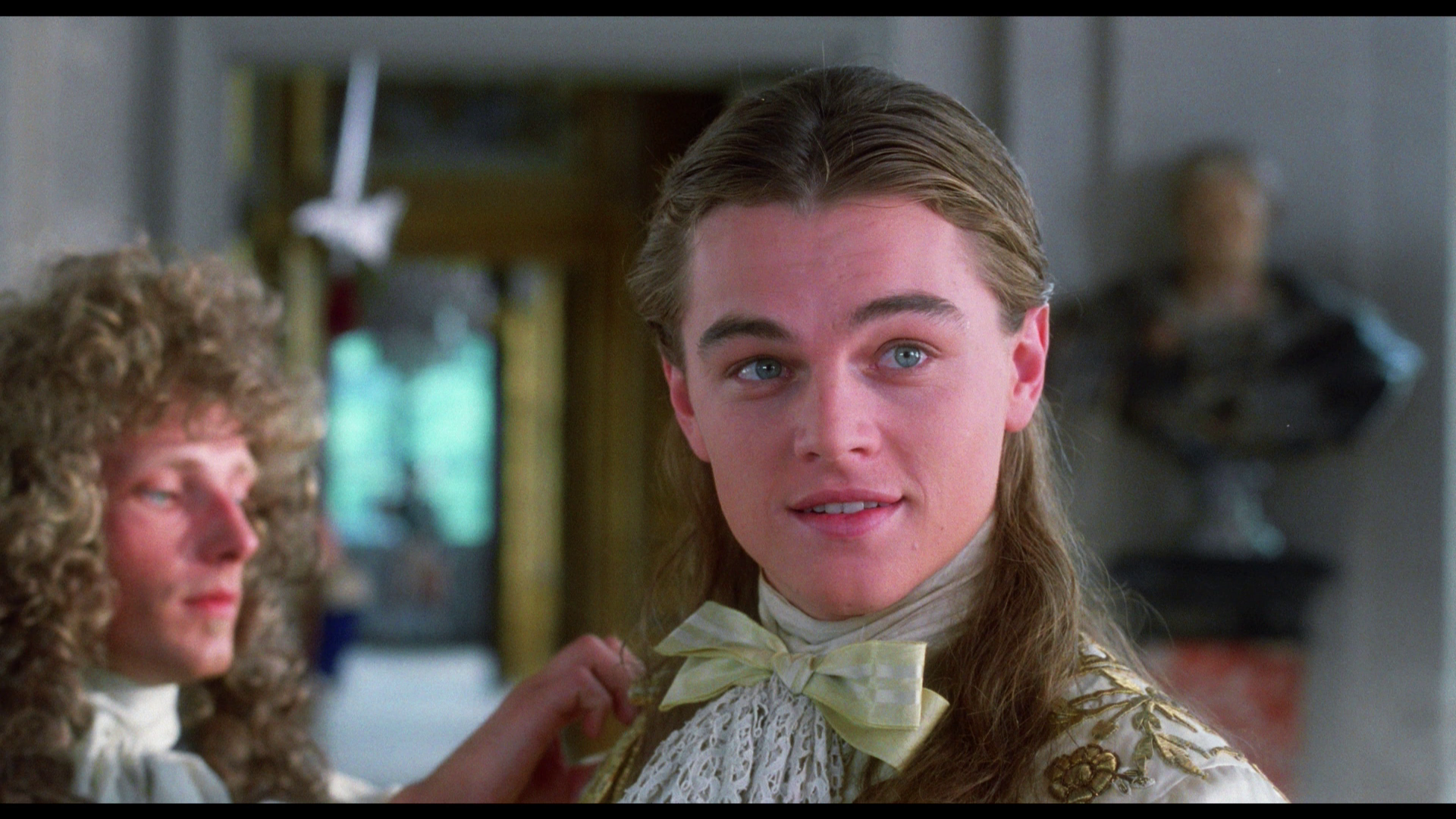 According to the technical specifications listed on IMDb this was shot on 35MM film using Panavision cameras. It is presented here on this new “20th Anniversary Edition” Blu-ray Disc release in the 1.85:1 aspect ratio, as originally theatrically intended. This comes from a new 4K scan of the original camera negative of the film.

It certainly looks like an improvement over the original 2010 Blu-ray release, that much is for sure, when looking at this visually in comparison. The black level is solid here, seemingly more-so than before, and colors are more vibrant. However, it is not perfect, but does offer up some pretty impressive amount of detail this time around. There’s just a lot of visual imperfections along the way here that haven’t been cleaned up. A lot of the visual imperfections, in my opinion, like the occasional specs of dirt or such are nice to see left in along with a nice healthy amount of film grain. Still, there are some imperfections that can be a tad bit distracting, as I’ll discuss in a moment. First, let’s just pause and say that you really have to remember that this is a new 4K scan, not a 4K restoration of the film’s original film (camera) negative.

Should this have been just a new 4K scan or a restoration? Well, I can’t really say that a full scale restoration effort would have been needed, having seen the entire film, but it sure feels some things should have been fixed (cleaned up) along the way so-to-speak. It’s very namely at around the 20 minute mark: as you’re watching John Malkovich act his heart out, to his left a vertically torn line on the film print steals the show for a good 5 seconds or more (as seen HERE in a screenshot). This totally is something that most people will miss, as it lasts for under 10 seconds, but when you start to look closer at it you’ll notice yet another slight vertical tear in the film print going right across Malkovich’s eye. It’s just something that has to be duly noted, as at least clean-up efforts of sorts on this particular scene would have been well worth it.

Now, with my OCD nature having run its course, I’ll digress and just take a deep breath and move on. Joking aside, in total fairness, this really does (with that as an exception) look extremely solid, and can even be pretty impressive at times with the newfound amount of detail. This offers more accurate colors and accurate fleshtones. The film here does look great at times, that much is for certain. Is it the best the film has looked? Yes, by all means. Is it the best the film will ever look? No, anyone could tell you that.

Given the 4K format alive and thriving, and the first 8K displays having just hit the market last month, I would imagine this isn’t the last time we’ll see this film get a new visual transfer for home video (physically or digitally). I will say, this may be perhaps the last Blu-ray (only) video transfer we might actually see of the film, as even it was from a 4K scan – it just didn’t receive a 4K UHD Blu-ray release. Next time around maybe they’ll opt for that, and fix the few occasional flaws.

Overall this scores way higher than the original 2010 Blu-ray in terms of video quality, yet offers some room for improvement. Still, it’s enough to leave fans of the film very pleased with how great this looks in comparison to the somewhat dull, even for its time, Blu-ray release from 8 years ago. This 20th Anniversary Edition Blu-ray release from Shout! Factory on the Shout Select label proves to be an improvement, and offers up a visual presentation that does the film some justice on Blu-ray. 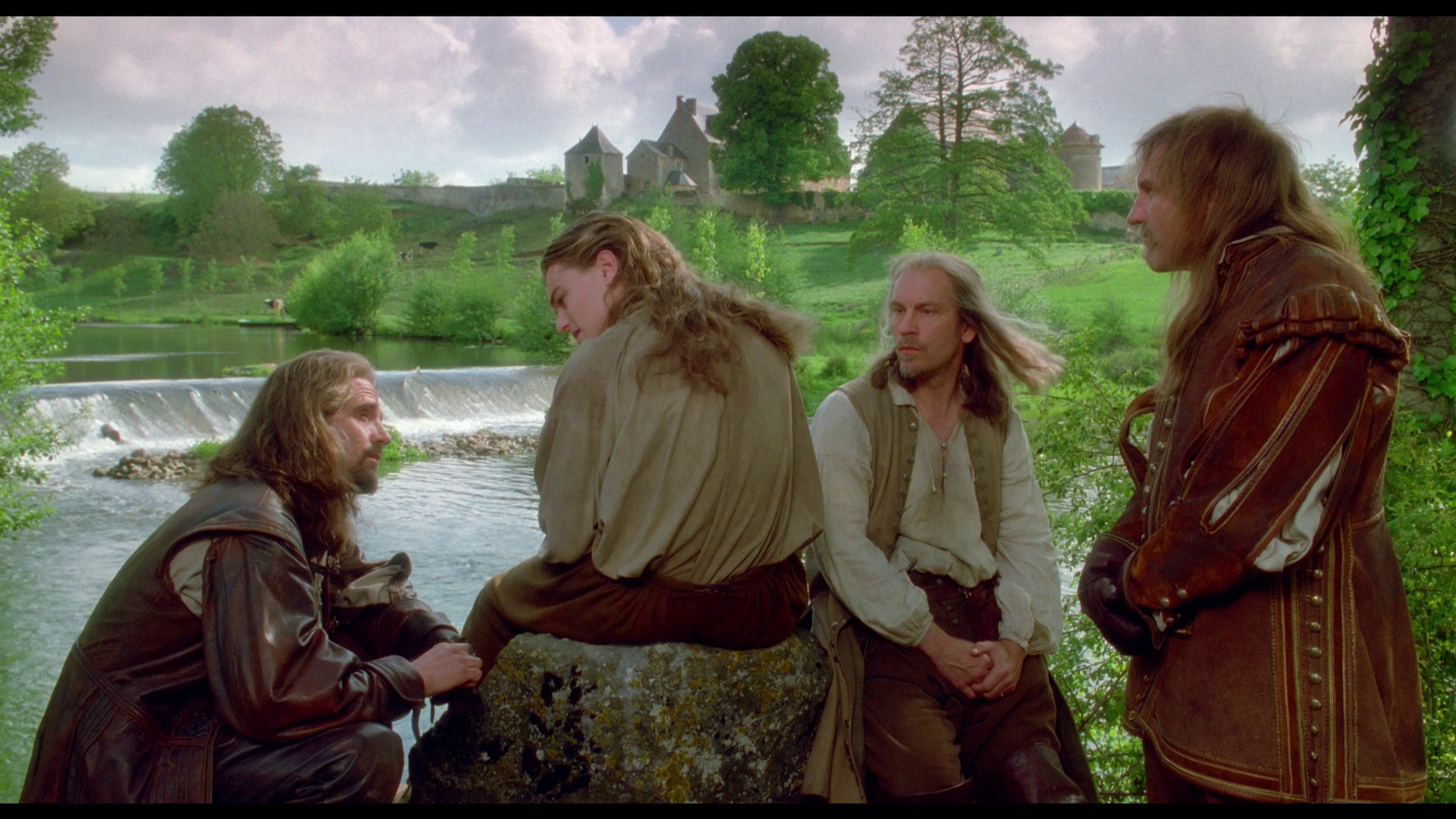 Audio here is presented in DTS-HD 5.1 Master Audio and DTS-HD 2.0 Master Audio Stereo. According to IMDb this film during its original theatrical run received DTS, Dolby Digital and SDDS surround mixes. Sure the original 2010 Blu-ray also contained a lossless 5.1 mix, in the very same format ironically, but that was a totally different sound mix. This time around it’s obviously been redone, as that previous mix was never too well respected back in those days. Even the stereo lossless mix here proves to be pretty good, if you’re into that sort of thing.

This film is mostly dialogue driven, that much is a fact. It’s also a fact that dialogue here is delivered distinctly, in the 5.1 mix via the center channel, and never requires any volume adjustments to discern what’s being said. Just because of the drama making dialogue so much of a factor doesn’t mean you can’t have some action or climactic moments in this 5.1 mix – as originally intended. That’s why the film’s original Score (music) by Nick Glennie-Smith helps add some impressive moments throughout the film, especially in its 5.1 lossless mix, as do sword fighting and other forms of action.

The 5.1 mix here offers up some bright use of the front channels for the majority of the music, sound effects and such, with the rear channels getting an almost constant use for music and/or sound effects. Both the music and sound effects translate over into some very nice bass via the subwoofer. The mix is sure to leave you somewhat impressed at times, for this blend of genres (action, adventure and drama). In this 20th Anniversary Edition Blu-ray release the 5.1 mix audio presentation is up to par with the new visual presentation (discussed further above). That being said, they’ve done this film justice in terms of sound. 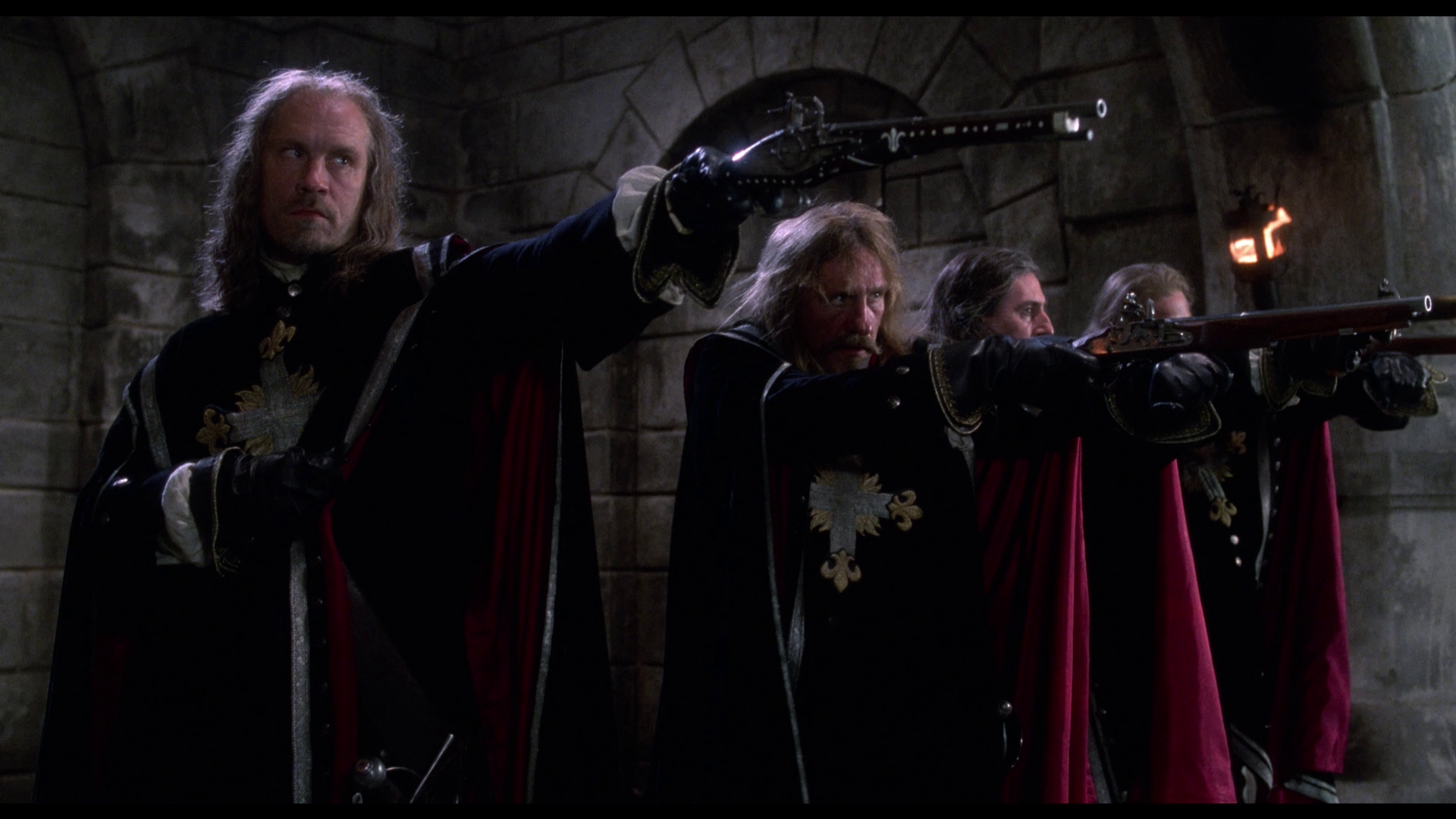 Bonus materials on this release all are presented in 1080p HD video with Dolby Digital 2.0 Stereo sound. They include the following:

Overall the bonus materials here prove to be informative, totalling up to roughly just a little over an hour in length, with two new interviews included along with the original Blu-ray and DVD bonus materials. It is a bit weird but the original 2011 Blu-ray actually featured 2 trailers for the film, when we only get one here. Still, that’s not really something I consider bonus material, and I can’t complain it’s missing. 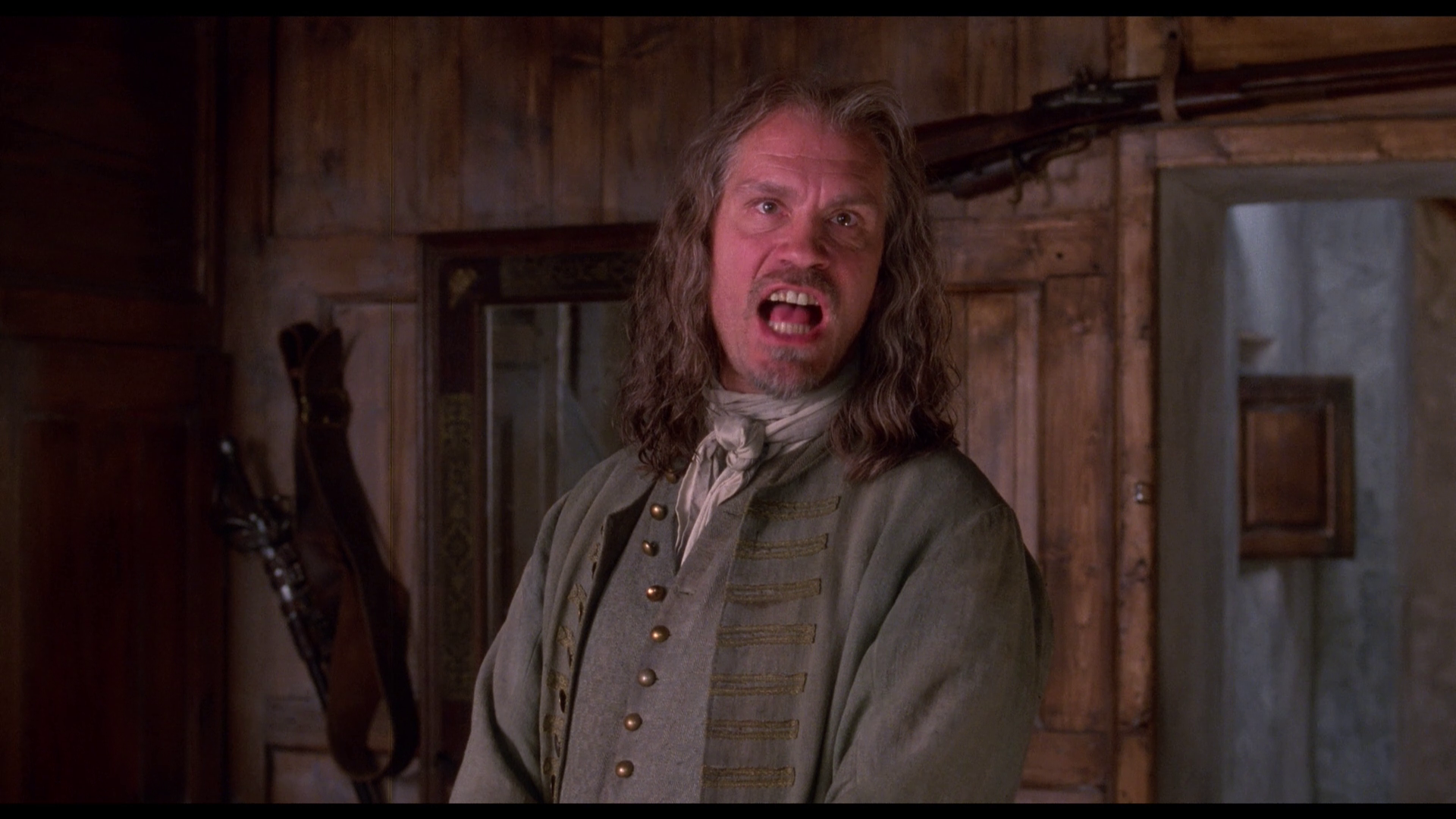 “The Man in the Iron Mask” in its 20th Anniversary Edition Blu-ray Disc release comes with some definite improvements visually and in terms of the audio presentation. The new 4K scan does bring some newfound detail along with it, as well as more accurate colors and such. However, this video presentation is not perfect, as I’ve mentioned there is one particular scene around 20 minutes in that has a vertical tear in the film print for about 5 seconds or so (as seen in the screenshot above). Sure, it’s not the worst thing in the world, but it is during a very, very important scene in the film, so it can be a bit annoying. That said, this is the best the film has ever looked in HD and is superior to the previous (2011) Blu-ray. Fans of the film will certainly want to pick this release up for the improvements and the two new interviews included on the bonus materials. 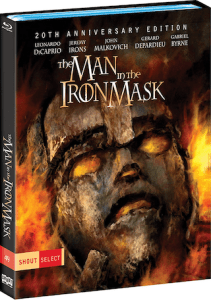