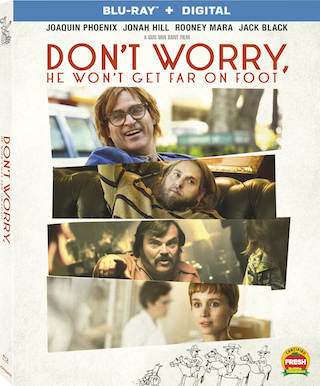 Experience “one of the best performances of Joaquin Phoenix’s career” (SlashFilm) when the Rotten Tomatoes Certified Fresh™ Don’t Worry, He Won’t Get Far on Foot arrives on Digital on October 2 and on Blu-ray™ (plus Digital) and DVD October 9 from Lionsgate. Directed by two-time Oscar® nominee Gus Van Sant (Best Director, Milk, 2008; Good Will Hunting, 1997), and adapted from the autobiography of Portland’s controversial but praised cartoonist John Callahan, the honest and moving comedy follows the true-life story of Callahan’s road to recovery from his addictions through art after becoming a quadriplegic due to a life-changing accident. Academy Award® nominee Jonah Hill (Best Supporting Actor, The Wolf of Wall Street, 2013; Moneyball, 2011), Academy Award® nominee Rooney Mara (Best Supporting Actress, Carol, 2015; Best Actress, The Girl with the Dragon Tattoo, 2011), and Golden Globe® nominee Jack Black (Best Actor, Bernie, 2011; School of Rock, 2004) give outstanding performances alongside Phoenix. Including two insightful making-of featurettes, the Don’t Worry, He Won’t Get Far on Foot Blu-ray and DVD will be available for the suggested retail price of $24.99 and $19.98, respectively.

John Callahan (Joaquin Phoenix) has a lust for life, a talent for off-color jokes, and a drinking problem. When an all-night bender ends in a catastrophic car accident, the last thing he intends to do is give up drinking. But when he reluctantly enters treatment — with encouragement from his girlfriend (Rooney Mara) and a charismatic sponsor (Jonah Hill) — Callahan discovers a gift for drawing edgy, irreverent newspaper cartoons that develop an international following and grant him a new lease on life. Based on a true story, this poignant, insightful, and often funny drama about the healing power of art is adapted from Callahan’s autobiography and directed by two-time Oscar® nominee Gus Van Sant. Jack Black, Carrie Brownstein, Beth Ditto, and Kim Gordon also star.

Joaquin Phoenix Walk the Line, The Master, Her

Rooney Mara The Girl with the Dragon Tattoo

Rating: R for language throughout, sexual content, some nudity and alcohol abuse