Three Thousand Years of Longing on 4K and Blu-ray 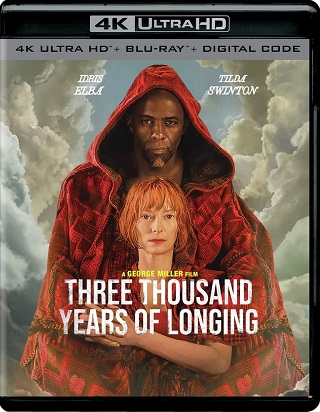 The 2022 film “Three Thousand Years of Longing” is officially coming to 4K UHD Blu-ray and Blu-ray Disc on November 15th via Warner Bros. Home Entertainment.  The film, directed and produced by George Miller, is based on the short story “The Djinn in the Nightingale’s Eye” written by A.S. Byatt and it stars Idris Elba and Tilda Swinton.

The tech specs for the 4K UHD Blu-ray include a 2160p video presentation with HDR10 form of high dynamic range.  Tech specs for the Blu-ray include a 1080p presentation and no word yet on what audio configuration either will receive, but stay tuned for an update on that hopefully soon.  Both releases will come in the form of a “combo pack” with the 4K getting its Blu-ray Disc counterpart, the Blu-ray getting its DVD counterpart, and each including a digital code (copy) of the film.

UPDATE:  You can now find the 4K UHD Blu-ray and Blu-ray versions available for preorder over at retailer Best Buy.

The releases don’t appear to include any extras.  Further below, after the break, you can find the trailer for the film and the announcement about the upcoming home video releases.

ARRIVES ON 4K, BLU-RAY AND DVD

Directed by Miller from a screenplay by Miller and Augusta Gore, the film is based on the short story “The Djinn in the Nightingale’s Eye “by A.S. Byatt. The film stars Idris Elba and Tilda Swinton and is produced by Miller and Doug Mitchell.

Dr Alithea Binnie (Tilda Swinton) is an academic…a creature of reason. While in Istanbul, she happens to encounter a Djinn (Idris Elba) who offers her three wishes in exchange for his freedom. At first, she doubts that he is real and she knows all the cautionary tales of wishes gone wrong. But the Djinn pleads his case, and eventually she is beguiled and makes a wish that surprises them both!