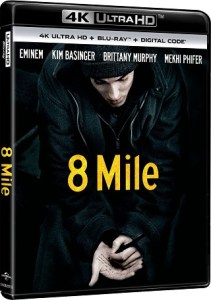 The 2002 film “8 Mile” is coming to 4K UHD Blu-ray on November 8th via Universal Studios Home Entertainment, according to numerous retailers.  The film, directed by Curtis Hanson, starred Eminem, Kim Basinger, Mekhi Phifer, and the late Brittany Murphy.  It’s certainly worth noting that the film won an Academy Award for “Best Music, Original Song” in 2002.

The tech specs for the release include a 2160p video presentation in the 2.35:1 aspect ratio with HDR10 form of high dynamic range and DTS:X immersive sound on a BD-100 disc.  The release will come in the form of a “combo pack” meaning that it will include its Blu-ray Disc counterpart as well as a digital code, compatible with Movies Anywhere.  You can now find the 4K UHD Blu-ray available for preorder over at Amazon.

The bonus materials (ported over from the previous Blu-ray) set to be included with the release are listed below.