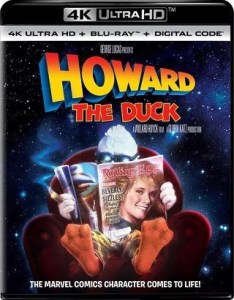 According to retailers, the 1986 film adaptation of “Howard the Duck” is coming to 4K UHD Blu-ray on July 6th via Universal Studios Home Entertainment. It was based on a Marvel Comics character of the same name. The film was executive produced by George Lucas, directed by Willard Huyck, and it starred Lea Thompson, Tim Robbins, Jeffrey Jones, Paul Guilfoyle, as well as featured the voice talent of Chip Zien (as “Howard T. Duck”). The tech specs for the 4K release have not yet at all been detailed, but you should expect it to include at least HDR10 form of high dynamic range and 5.1 lossless surround sound. The release appears (based on the art, above) to be coming in the form of a “combo pack” meaning that it will include the Blu-ray Disc counterpart and a digital code (copy) of the film. No word yet on what bonus materials will be featured with the release.

UPDATE #1: You can now find the 4K UHD Blu-ray listed for preorder over at Amazon as well as over retailer Target as well as at online retailer HD Movie Source. That’s where the release date, aside from some rumors online that now seem to be verified, comes from. Stay tuned for further updates and for when this title gets officially announced by the studio [Universal].

UPDATE #2: It now appears that there will be an exclusive 4K UHD Blu-ray SteelBook for the film available over at retailer Best Buy, where it now has a preorder listing and the artwork pictured below.