The Father starring Anthony Hopkins on Blu-ray in May 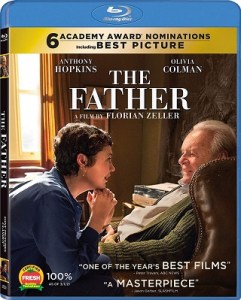 UPDATE: The 2020 film “The Father” is officially coming to Blu-ray Disc on May 18th via Sony Pictures Home Entertainment. The film won two Academy Awards (including ‘Best Adapted Screenplay’ and ‘Best Actor’) out of the 6 “Oscars” total that it was nominated for last night. The Father was directed by Florian Zeller and stars Anthony Hopkins, Olivia Colman, Mark Gatiss, Olivia Williams, Imogen Poots, and Rufus Sewell. The film, at the time of writing, is “Certified Fresh” over at Rotten Tomatoes.

Tech specs for the Blu-ray include a 1080p HD video presentation in the 2.39:1 aspect ratio and DTS-HD Master Audio 5.1 lossless surround sound. The bonus materials set to be included with the Blu-ray are listed below.

You can find the Blu-ray is now available for preorder over at Amazon. And, there’s also a product page over at retailer Best Buy that lists the Blu-ray as coming soon. Below, after the break, you can find the trailer for the film and the full announcement regarding its home video release.

A man (Anthony Hopkins) refuses all assistance from his daughter (Olivia Colman) as he ages. As he tries to make sense of his changing circumstances, he begins to doubt his loved ones, his own mind and even the fabric of his reality.