Oscar-nominated 2020 film Minari comes to Blu-ray in May 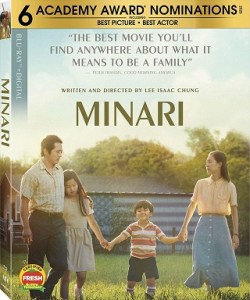 Tech specs for the Blu-ray release include a 1080p HD video presentation in the 2.39:1 aspect ratio and DTS-HD Master Audio 5.1 surround sound. The release will come with a digital copy of the film. You can find the Blu-ray available for preorder over at Amazon. As mentioned (and noted on the artwork) this film is nominated for a total of 6 Academy Awards, including Best Picture. It’s also worth noting (as on the art) that the film is currently (at the time of writing) “Certified Fresh” over at Rotten Tomatoes.

UPDATE: The bonus materials set to be included with this release are listed below.

Further below, after the break, you can find the trailer for the film as well as the full info regarding this home video release of the film.

A tender and sweeping story about what roots us, Minari follows a Korean-American family that moves to an Arkansas farm in search of their own American Dream. The family home changes completely with the arrival of their sly, foul-mouthed, but incredibly loving grandmother. Amidst the instability and challenges of this new life in the rugged Ozarks, Minari shows the undeniable resilience of family and what really makes a home.