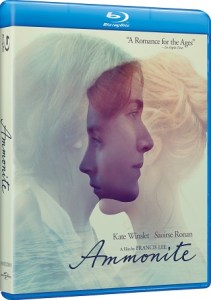 The 2020 film “Ammonite” starring Kate Winslet is officially coming to Blu-ray Disc on January 12th via Universal. Yes, this comes as a bit of a last-minute announcement. The film, written and directed by Francis Lee, co-stars Saoirse Ronan, Gemma Jones, Fiona Shaw, Claire Rushbrook, Alec Secareanu, and James McArdle. Tech specs for the Blu-ray release include a 1080p HD presentation in the 1.85:1 and DTS-HD Master Audio 5.1 sound on a BD-25 (25 gigabytes single-layered) Blu-ray Disc. The release on Blu-ray can now be found to preorder over at Amazon. The only bonus material that is set to be included with the release is listed below.

Further below, after the break, you can find the trailer for the film and the official announcement for the home video release.

“A ROMANCE FOR THE AGES” – MARK OLSEN, LOS ANGELES TIMES

OWN IT ON DIGITAL, BLU-RAY™ AND DVD JANUARY 12, 2021
FROM UNIVERSAL PICTURES HOME ENTERTAINMENT

In 1800s England, acclaimed but unrecognized fossil hunter Mary Anning (Winslet) works alone on the rugged Southern coastline. With the days of her famed discoveries behind her, she now searches for common fossils to sell to tourists to support herself and her ailing mother. When a wealthy visitor entrusts Mary with the care of his wife Charlotte Murchison (Ronan), she cannot afford to turn his offer down. Proud and relentlessly passionate about her work, Mary initially clashes with her unwelcome guest, but despite the distance between their social class and personalities, an intense bond begins to develop, compelling the two women to determine the true nature of their relationship.