Eddie Murphy film Coming to America on 4K in December 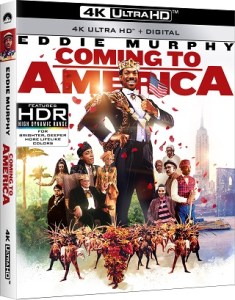 The 1988 film “Coming to America“ starring Eddie Murphy is officially coming to 4K UHD Blu-ray on December 1st via Paramount. This is an obvious promotion for the film’s upcoming and highly anticipated sequel — likely coming later this year. The film, directed by John Landis, co-starred Paul Bates, Garcelle Beauvais, Victoria Dillard, James Earl Jones, Madge Sinclair, Sheila Johnson, and Arsenio Hall. Tech specs for the release include a 2160p 4K presentation in the 1.85:1 aspect ratio with HDR10 form of High Dynamic Range from a new 4K restoration supervised by the film’s director John Landis. In fact, here’s an official statement regarding this release:

No word yet on the specific sound format for the release, although I have inquired to the studio [Paramount] about that and will hopefully have an update on it soon. The release will come in the form of a “combo pack” meaning that it will include its Blu-ray Disc counterpart and a digital code (copy) of the film. UPDATE #1: There’s now a preorder listing available for this 4K UHD Blu-ray over at Amazon. The bonus materials set to be included on the release are listed below. 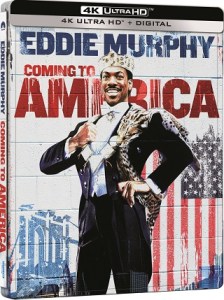