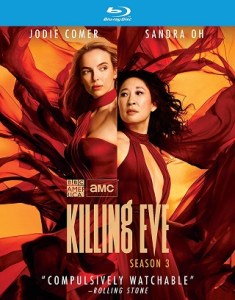 The TV series “Killing Eve: Season 3“ is coming to Blu-ray on September 15th, via Image Entertainment, according to an early retailer listing. The show, which airs on BBC America and AMC, created by Phoebe Waller-Bridge, stars Jodie Comer and Sandra Oh. Tech specs and bonus materials for the release have not yet been detailed. You can now find this Blu-ray Disc available for preorder over at Amazon.

Lastly, it is certainly worth mentioning here that this would be the first season of the show that isn’t released directly by BBC Studios if indeed Image Entertainment is distributing this. Based on the cover art, this could be true and not a typo in the listing, but I’ll be looking and making sure this is in fact true regarding the distributor — as other retailers start to list this. Stay tuned for updates.