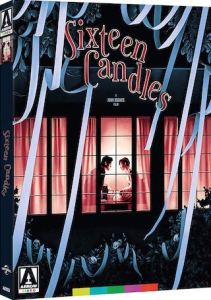 The 1984 John Hughes film “Sixteen Candles“ will be getting a “Special Collector’s Edition” Blu-ray Disc release on April 14th, via Arrow Video. The film starred Molly Ringwald, Anthony Michael Hall, Justin Henry, Michael Schoeffling, and Gedde Watanabe. Tech specs for this new Blu-ray include 1080p video in the 1.85:1 aspect ratio from a new 4K restoration with both the original lossless Mono and 5.1 surround sound options. The release will include the Theatrical version (92 minutes) and an “Extended Version“ (94 minutes) that is premiering here on this new Blu-ray release. The upcoming Special Collector’s Edition Blu-ray is now available for preorder over at Amazon. Details about the release and the bonus materials, as well as physical extras set to be included on the release, are listed below.