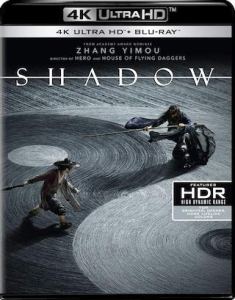 The 2018 Chinese film “Shadow” is coming to both 4K UHD Blu-ray and Blu-ray Disc on August 13th via Well Go USA, according to retailers. The film, directed by Academy Award-nominated filmmaker Zhang Yimou (“Hero” / “House of Flying Daggers”), stars Chao Deng, Li Sun, Ryan Zheng, Qianyuan Wang, Jingchun Wang, Jun Hu, and Xiaotong Guan. The film has received much critical acclaim so far. In fact, it (at time of writing) is “Certified Fresh” over at Rotten Tomatoes.

The tech specs for the 4K include 2160p video in the 2.35:1 aspect ratio with HDR10 form of High Dynamic Range and Dolby Atmos sound. Technical specs for the Blu-ray include 1080p video in the 2.35:1 aspect ratio and Dolby Atmos sound. Both releases include both a Mandarin (Chinese) and English dubbed language tracks with English and Chinese subtitles. The two releases will each come in the form of “combo pack” with the 4K getting a Blu-ray and the Blu-ray getting a DVD included. You can now find the film on both 4K UHD Blu-ray and Blu-ray Disc available for pre-order over at Amazon. The bonus materials set to be included on the releases are listed below.