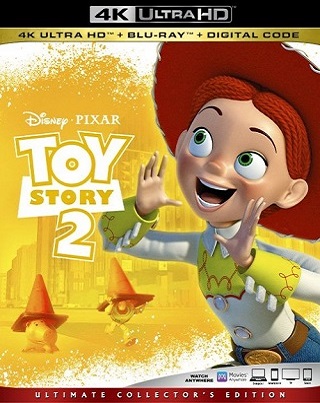 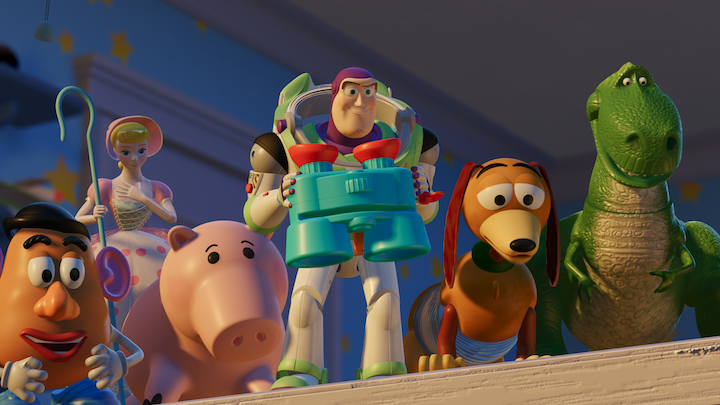 I had an absolute blast revisiting the first film but despite how groundbreaking the computer animation was, it is very dated by today’s standards. As we get towards the third entry into the series this obviously improves and this certainly looks better but by how much? Read on! When “Toy Story” was released to great success and favorable reviews, the decision was made not more than a month later to begin production on “Toy Story 2”. Originally this was supposed to follow much the same fate as the awful “Aladdin 2 The Return of Jafar” as a direct to home video sequel. That film was able to generate $300 million on VHS sales so a low-cost high return sequel is always what studios want. However as was the case of the production in the first film, Toy Story 2 was destined for production Hell…Let’s dive in.

The story goes like this. A few days after the original film was released in theaters, John Lasseter was traveling with his family and sees a young boy with a Woody doll at an airport terminal. Lasseter described how the boy’s happiness showing his father the toy moved him as he now realized that his character no longer belonged to him only, but rather it belonged to the world as well. The memory was a defining factor in the production of Toy Story 2, with Lasseter, in many interviews, recounting how that moment defined the film’s creation and his motivation to make the best film he could.

Now I’m not a pessimist and that’s a fantastic story but I also know that when you have a hit movie on your hands you don’t stop at one. So production on the straight to home video sequel was highly encouraged by then Disney Chairman Joe Roth. Yeah, he is the same guy who directed “Revenge of the Nerds II” and became chairman of Disney. As production started things began to take shape and questions formed such as who would return from the original cast. Also, an issue was scheduling conflicts and whether or not Disney could afford to pay them what they wanted after the first film’s success.

Lasseter felt this was a chance to develop talent so he turned to Ash Brannon, a young directing animator on “Toy Story” whose work on the first film he admired. The sequel was announced and preproduction began. The original film was limited in scope to 2 different houses as the movies setting and not much beyond that. Lasseter felt the need to go bigger in scale to create a whole world of toys. He also wanted to capture the notion of how a toy could possibly feel when it’s not played with ever or a child grows out of it. Lasseter himself has 5 sons and is an avid toy collector, especially of vintage ones. He recounted many times telling his children which ones to touch and not touch. This helped carve the story of “Tin Toy Christmas” with seeing toys as collectibles and not playthings that are used here. In this case, it would be our main character Woody as the collectible. Now inject the obsessive collector of said Woody toys, who almost made it into the original movie, “Al McWhiggin.” Lasseter claimed that Al was inspired by himself but was scrapped and you have most of the plot elements of this movie.

Building Woody’s backstory required delving into old western and puppet shows for kids dating back to the 40s and 50s. Hopalong Cassidy and Howdy Doody served as inspiration for the new characters Jessie and Stinky Pete. It’s also worth pointing out the character of Jesse was inspired by John’s wife who wasn’t entirely happy that a strong female role was excluded in the first film. Bo Peep was as close as they came due to the licensing of Barbie being denied after Mattel thought the original film would bomb… of course she’s certainly in this film and Mattel released an exclusive because of the film.

Lasseter called a group together and in two days hammered out the initial draft of the film. With what seemed like a finished story, the task of who would handle the animation began. All of Pixar was working on “A Bugs Life” so they just lacked the resources. Pixar had another division called the Interactive Products Group which handled 2 successful CD-ROMS with as much animation as the original film done by a team of 30. Steve Jobs (yes, the one who co-founded Apple) made the decision to shut down the division and make them the core team to work on the new film’s production. This team was closely monitored by Lasseter who wanted changes throughout the process to further perfect the product.

Disney became upset with the slow pace of the work on the film and demanded some changes to the film’s team. Ralph Guggenheim was removed as the film’s producer and Pixar was forced then to move up Karen Jackson and Helene Plotkin, former associate producers into the roles of co-producers. Lasseter would take over directing duties and added Lee Unkrich as co-director. Unkrich worked with Lasseter on supervising editor duties on “A Bug’s Life,” would focus on layout and cinematography, while then director Brannon would be credited now as co-director.

5 months later Disney executives were impressed enough that the decision was made to now make Toy Story 2 into a feature film. This in part was due to rising production costs and high crew salaries. Impressed with some finished content provided to Disney, Joe Roth met with Steve Jobs and reached a 5 film deal, however, this film would not count as they had to be new films, not sequels. Disney wanted all new characters so it could incorporate them into merchandise and theme parks. This leads to yet again more tension between the studios. The film’s production hit its worst patch yet when Pixar staff felt the film was not turning out well, a sentiment that Lasseter echoed to Disney. They did not agree and despite Jobs pressing for a delayed release date, it stayed the same.

John wasn’t going to give up and proposed the insane task of redoing the entire film in 9 months. The crew reworked the story, added new elements and worked 48-hour shifts. An infamous story, to further show how cursed this production was, involved the movie being deleted 2 times from the servers but thankfully recovered. Many in the crew developed carpal tunnel from the strain and long hours but they made the deadline and the film was released on time to massive critical acclaim and success. The film grossed $497 million on a budget of $90 million. Currently, it holds a 100% score on Rotten Tomatoes, making it “Certified Fresh” by their standards. The film also was nominated for an Academy Award as well as for two Golden Globe Awards, winning one Golden Globe (for Best Motion Picture – Comedy or Musical).

I must say this film is truly amazing. The plot is simple but effective. Woody was a toy passed down from the family but it turns out he’s a rare collectible. The toy collector Al steals Woody from a yard sale to finish the collection to be displayed in a foreign museum. Buzz and the gang venture into the world to find Woody and return him home to Andy. They encounter new friends along the way voiced brilliantly by Joan Cusack, whose character really offers new perspective and dimension. The idea that toys could feel such emotion and abandonment has me checking on my S.H Figuarts Dbz collection daily to give them some love. Regardless of the extra duties I now have with toys, the film is amazing. If you haven’t seen it you should, it’s that damn good. 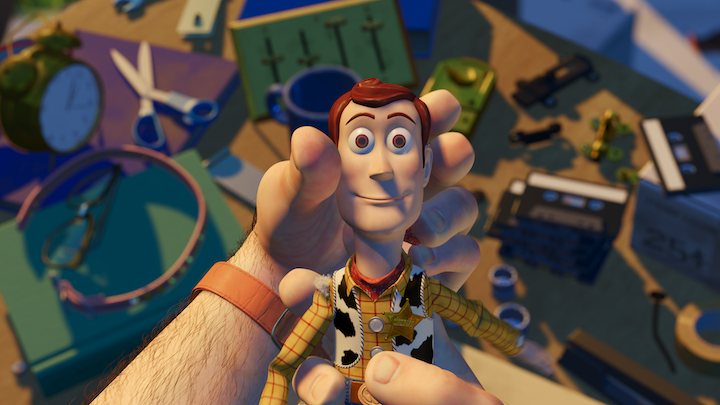 The film is presented in a 1.78:1 aspect ratio with the HDR10 form of High Dynamic Range. This time around with a near HD resolution source (1280×1024 pixels) the 4K UHD Blu-ray version like the first film wasn’t much of an upgrade in resolution when comparing it to the 1080p HD found on the original Blu-ray. Still though, just like with the other film, the HDR grade is tremendous. The color palette is gorgeous and lush bright. The image “pops” off the screen on my OLED display and was just as detailed as I had expected it to be.

A real standout in the video presentation is the opening sequence with Buzz Lightyear. The planet is highly detailed and has a great pop to the lasers as well as within Zurg‘s dark lair. The image is razor sharp almost with very nice textures and plenty of fine detail for the eyes to see all throughout in 4K. While the animation is still just a little bit dated, I have to hold back on a perfect score for the video quality. It comes close to perfection, that much is for certain. 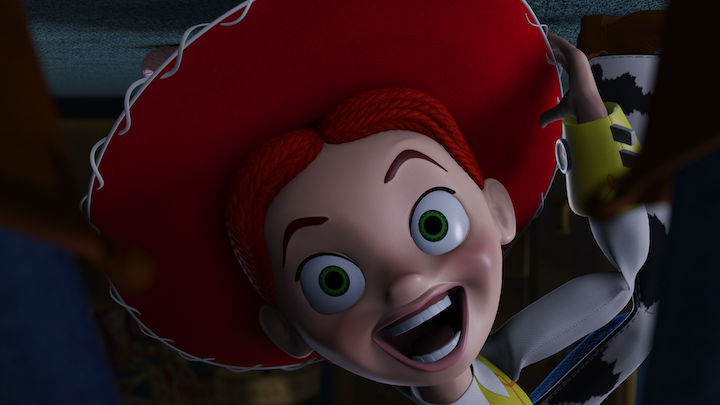 I’ll say this again this is robust, loud and detailed from the start, This isn’t “AtMouse” by any means. The Dolby Atmos mix has great use of the surrounds and deep bass. The overhead channels are engaged much more than they were with the first film, so I found it fantastic. Dialogue is delivered precisely throughout.

I’m the type to hold my audio scores (5/5 scores) close to the chest, so with that being said, it’s not going to be perfect for me, but it’s close. I mean really close. 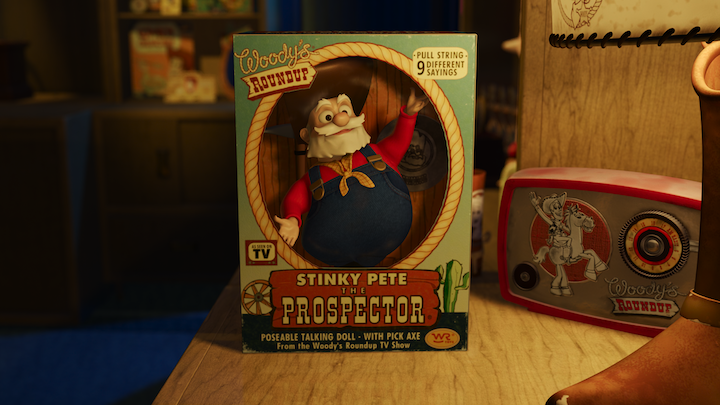 The bonus materials are primarily found on the Blu-ray Disc which contains all of the previous Blu-ray materials. These include the following:

Overall the bonus materials here are pretty impressive but not fully perfect, as they recycle a bit much of the original DVD extras in standard definition. Still, it totals up to two hours roughly and it’s a blast from the past to see these extras each time. I just wish they had included some new content but to no avail. 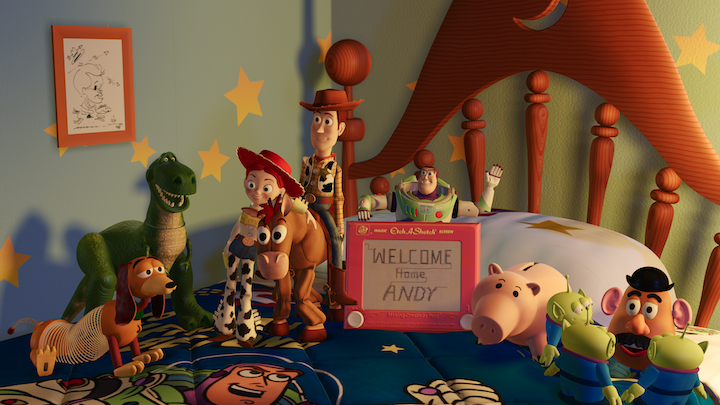 “Toy Story 2” is a movie that truly offers a brilliant story, one so good I plan to share this with my kid as he grows up. It offers great PQ and Audio and all the usual supplements from the beloved Blu-ray Disc. I wish it had maybe some new content but it’s only a small knock. This is one that’s Highly Recommended for all ages.

Overall Verdict:
Highly Recommended for All

A longtime movie collector and student of film since seeing Predator as a kid, I’ve been involved in consumer electronics for 2 decades which I do till this day. Current favorite genres are sci-fi, action and anime films. Self-admitted obsession with Dolby Vision and Atmos. View all posts by Brandon Cortez