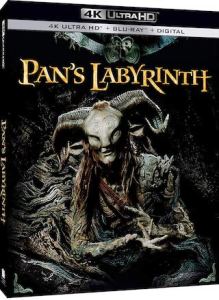 The 2006 film “Pan’s Labyrinth“ is coming to 4K UHD Blu-ray on October 1st via New Line (Warner), according to an early alert to retailers. The film, from Academy Award-winning director Guillermo del Toro, starred Ivana Baquero, Ariadna Gil, Sergi López, Maribel Verdú, and Doug Jones. Tech specs and bonus materials for the release have not yet been detailed but stay tuned for an update. You can find the film available now to pre-order over Amazon and Best Buy. It is known that the release will come in the form of a “combo pack” with a Blu-ray and a digital copy of the film included.