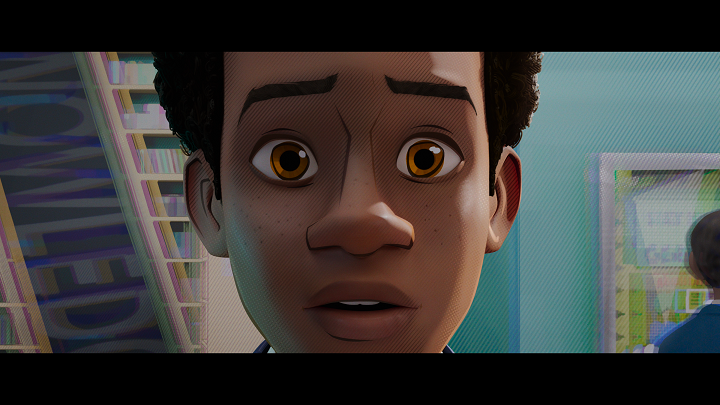 “Spider-Man: Into the Spider-Verse” was a 2018 animated film featuring the Marvel comic book character “Spider-Man” created by Stan Lee and Steve Ditko. This was the first theatrical film to ever be based solely on the character and not be live-action as well.

Into the Spider-Verse takes all of the original comic book history and also the film history and blends the two together, much like its plot blends together multiple universes. You will see references to comic-related stuff here and you will see references related to the motion pictures such as Sam Raimi’s “Spider-Man” (2002) and even its sequels. It pays homage to the legacy that this character has developed over the course of time both on pages and screens, as well as ushers in a new face to go behind the mask. The new face behind the mask was someone first introduced in the comics and that new face is “Miles Morales” (Shameik Moore).

Miles is a teenager, from a mixed race family of African-American and Latino heritage, living in Brooklyn. He lives in a universe where we are first introduced to the (original) “Spider-Man” (Chris Pine) a.k.a. “Peter Parker” during the opening of the film. In this world, Spidey is a tad bit cocky and pretty well aware that he’s kind of a big deal. It’s fun to see that side of the character at first, but then you’ll see some other side of both Peter Parker and Spidey when another universe opens up (long story short) and you start to have all different versions of the character appear.

The parallel universe version of the hero comes in the form of “Peter B. Parker” (Jake Johnson) and certainly is not at his prime in comparison to the other Spider-Man. In fact, he’s pretty much out of shape and a slob but hey, I’m just being honest here (see below). Miles manages to end up crossing paths here with the original Spider-Man and the other versions that come over the course of the film because they are all connected through a series of universes that have become unstable. The reason they’ve become unstable is pretty much the doing of one of the hero’s most worthy adversaries “Wilson Fisk” (Liev Schreiber) a.k.a. “Kingpin” along with the help of some other familiar faces like “Green Goblin” and more.

Also joining the universe here you have the other versions like “Spider-Man Noir” (Nicolas Cage), “Gwen Stacy” (Hailee Steinfeld), “Peni Parker” (Kimiko Glenn), and last but certainly not least “Spider-Ham” (John Mulaney). Those already in the universe include Mile Morales’ father “Jefferson Davis” (Brian Tyree Henry), mother “Rio Morales” (Luna Lauren Velez), and “Uncle Aaron” (Mahershala Ali). Simply put, Spider-Verse is an animated film that is unlike anything you have ever seen that takes the art style of comics to a whole new level. The story itself takes the character to a whole new level as well, and this is certainly one of the freshest takes on the whole thing. 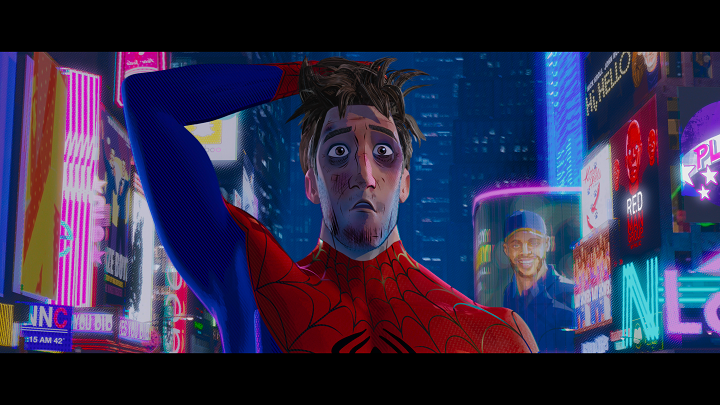 This comes to 4K UHD Blu-ray presented in the 2.39:1 aspect ratio, just as it was shown during its theatrical run.

In its 4K debut, “Spider-Man: Into the Spider-Verse” gets just the HDR10 form of High Dynamic Range included on this release. According to IMDb, this was actually created using the Dolby Vision cinematography process and then even shown in Dolby Vision during the theatrical run – in select theaters. However, if you want to see the film in 4K with the Dolby form of high dynamic range you’ll have to stream it online via the digital version (on services like iTunes or Vudu). It’s unfortunate that the 4K physical release lacks Dolby Vision, for those who prefer that HDR form, but you’ll just have to settle for standard HDR10 here.

First off, let’s just say that the art style and other choices made by the folks at Sony Pictures Animation prove to be some of the most unique that I have seen in the field of animation in over a decade. This blends 2D style sketches with 3D animation in something you have to see to fully understand. They [Sony Pictures Animation] not only chose to use classic comic book style shading, digitally replicate Ben Dry dots, use panel framing and all but they also chose to do some major other things to set a visual style unlike we’ve ever seen before.

Some of these things that makes this so different tend to be noticeable to most viewers, while some small things might not. For example, the typical frame rate for a motion picture is 24 frames per second (24fps) but they chose to make it run at half the speed to run at 12 frames per second during the animation rendering process. This still comes to you in 24 frames just as you’re used to seeing films played back in however, it’s only using half of those frames per second. That’s why the movement here can seem a tad bit choppy perhaps and you need to understand that it was done on purpose.

The other type of thing visually a lot of people will notice and some even complain about is the fact that during the opening half (at least) of the film it can at times feel like there are multiple layers of outlines. This is another visual style choice made to set emphasis on the fact that several universes are unstable, and about to collide. It’s really not all too subtle, at all. So, keep this in mind about the way that the film was intended to look.

Now, the 4K release here offers a very nice improvement in terms of amount newfound detail in the unique animation when compared to just the standard HD (Blu-ray) version. Things are sharper, for sure, outlines are bolder, and the colors more vibrant with the addition of HDR (here in HDR10 form). The black level is perfectly solid, just like the ink from the comic book pages that this all was inspired by. This film looks downright mind blowing, especially in 4K, but I’ll admit might be hard for some people to get used.

Regardless of how visually different it seems “Spider-Man: Into the Spider-Verse” on 4K UHD Blu-ray delivers an absolutely gorgeous video presentation that makes for one of the best looking animated films (so far) for the format. 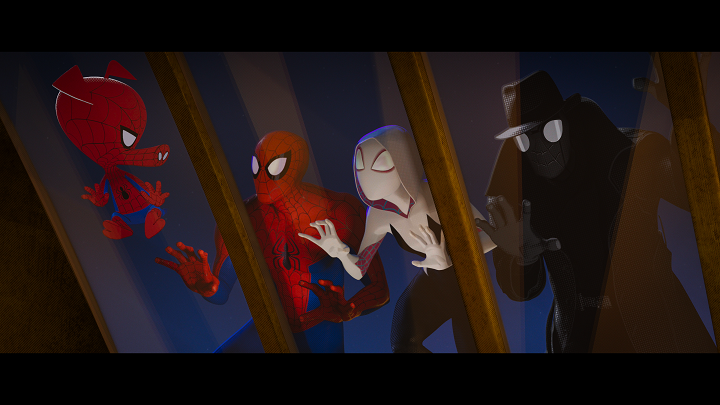 Audio here is presented in Dolby Atmos, with a Dolby TrueHD 7.1 core for those without the proper equipment to decode Atmos. It is worth noting that included Blu-ray only features a DTS-HD 5.1 Master Audio sound mix.

This is one intense audio mix and also one of my new favorite Atmos mixes that I’ve heard (to date). From the very start of the film, you’ll be noticing how the height speakers are used very nicely in the Atmos mix to really deliver something coming from above that will leave you feeling right smack-dab in the middle of the action or hear it fly past you in a very bold way. The rear channels are used very nicely for the sound effects and such to set the environment as well as occasionally for the film’s original music (by Daniel Pemberton) or songs from the soundtrack. The music here sounds great and is primarily driven from the front left and right channels with lyrics on songs delivered through the center channel. Speaking of the center channel, it is used perfectly to be your primary source of the dialogue which is spot-on all throughout.

There’s action here from the very start (as mentioned) and the action really never stops until the film does. I can safely say you will not find yourself making any volume adjustments here, as I watched this through at my typical reference level and found it to be nothing short of perfect. This really is one very impressive sound mix that should be “demo material” for all ages, giving parents a chance to let their children experience Dolby Atmos at its finest. 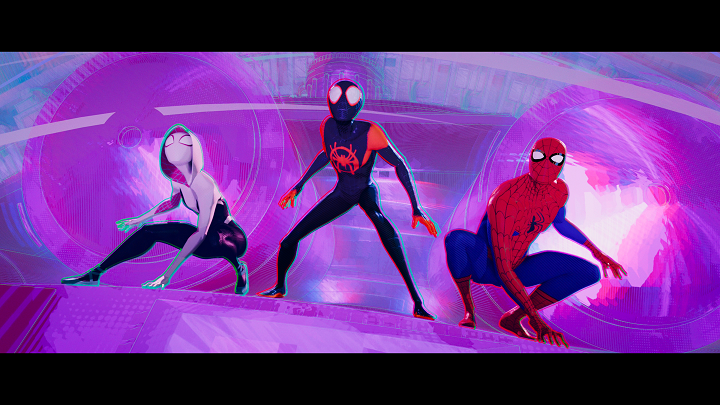 Bonus materials are ALL presented in HD video with Dolby Digital 2.0 Stereo sound. Those included on the 4K Disc are listed below:

The real bonus materials are found on the “Special Features” (2nd) Blu-ray Disc and are presented in HD video with Dolby Digital 2.0 Stereo sound. These include:

Overall the bonus materials here prove to be entertaining, informative and even a tad bit emotionally touching (with the tribute). There’s an “Alternate Universe Mode” found only on the Blu-ray to experience (for those interested). There’s an audio commentary and short both included on the 4K disc (as well as the Blu-ray). The rest of the extras (on the Blu-ray) total up roughly to a little bit just over an hour. So, it’s enough to leave any fan pleased in terms of what you get here. Plus, you do get the digital copy of the film which you can use to watch the film in 4K with Dolby Vision on services like iTunes or Vudu. 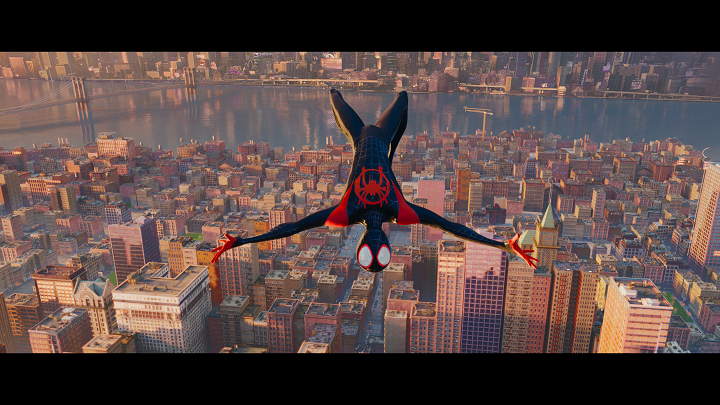 “Spider-Man: Into the Spider-Verse” as an animated film and as another “Spider-Man” film is a breath of fresh air to both the animated genre and to the character. After all of the live-action films over the years, which I’ll admit I enjoyed, we finally get to see the latest version of the superhero introduced into the universe. You’ll have to keep in mind that this isn’t the Marvel Cinematic Universe that Marvel Studios is responsible for but instead Sony. There are some great references here to previous Spider-Man merchandise, cartoons, comics, and the Sam Raimi directed films.

The 4K brings some very unique animation to life in a really impressive fashion visually. This looks perfect for the style of film that this is. The Dolby Atmos sound mix is one very intense listening experience. This is sure to keep you happy both visually and with the audio surrounding you (literally).

The bonus materials round things out here with an above solid set of extras. You get the option to watch the film (on Blu-ray) with alternate scenes, plotlines, characters and stuff thrown into the final film – where they would have appeared. The biggest downside to this feature, aside from not being on the 4K disc, is the fact that almost all of these are nothing but storyboard sketches and are not at all visually compelling enough to keep the average viewer interested. Still, it’s nice to have this include for those who will find it to be enjoyable. There’s a nice set of featurettes here that all focus on making the film. It makes for what I’d say is a very highly recommended release on the 4K format.

One thought on “Spider-Man: Into the Spider-Verse – 4K UHD Blu-ray Review”