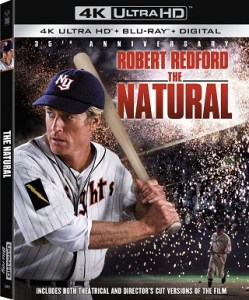 CULVER CITY, Calif. (March 11, 2019) – Just in time for Father’s Day, celebrate the
35th Anniversary of one of the most beloved sports films ever made when THE NATURAL debuts on 4K Ultra HD™ and in 4K via participating Digital platforms June 4 from Sony Pictures Home Entertainment. Robert Redford stars as man who seemingly comes out of nowhere to become a legendary baseball player with almost divine talent in this classic film that also stars Robert Duvall, Glenn Close in an Academy Award®-nominated performance and Kim Basinger. THE NATURAL was nominated for four Academy Awards®, including Best Cinematography and Best Original Score,* both vibrantly presented as part of this all-new 4K presentation.  The 4K Ultra HD disc includes both versions of the film: the original Theatrical version and the Directors Cut, each fully restored from the original camera negative, supervised and approved by Director of Photography Caleb Deschanel and Director Barry Levinson. Both versions of the film also include newly remixed Dolby Atmos audio, along with the original stereo and 5.1 tracks for the Theatrical version.  THE NATURAL includes hours of archival special features, including a variety of featurettes that go inside the making of this iconic classic and its greater context within baseball history and mythology.

Celebrate the 35th anniversary of one of the greatest sports films ever made. Nominated for four 1984 Academy Awards® — including Best Cinematography — and featuring an all-star cast, including Robert Redford, Robert Duvall, Best Supporting Actress nominee Glenn Close and Kim Basinger, THE NATURAL follows the epic journey of Roy Hobbs. A ballplayer on his way to stardom in the big leagues, Hobbs finds his dreams shattered when a mysterious woman and a silver bullet end his career prematurely. Sixteen years later, Hobbs finds himself coming back to baseball, joining the roster of the lowly New York Knights. Can Hobbs overcome physical pain — and nefarious forces — to lead the Knights to the pennant?