RUMOR: “Happy Death Day 2U” starring Jessica Rothe comes to Blu-ray in May 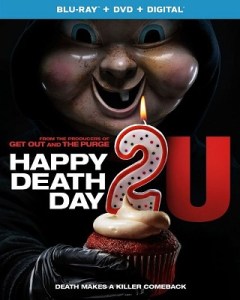 The 2019 sequel “Happy Death Day 2U“ is rumored to be coming to Blu-ray Disc on May 14th via Universal, according to early alerts to retailers. I am only saying this is a rumor as the studio has not yet officially announced this title. The film, produced by Blumhouse & directed by Christopher Landon, includes a cast of  Jessica Rothe, Israel Broussard, Phi Vu, Suraj Sharma, Sarah Yarkin, Rachel Matthews, and Ruby Modine. It is known that it will come in the form of a “combo pack” with a DVD and digital copy of the film included. The Blu-ray is already available to pre-order over at Amazon and it even has a placeholder over at Best Buy (with the release date listed).

UPDATE: This release has been confirmed to be coming out on the date I originally specified. Production company Blumhouse has now posted a promotional ad on Twitter for the home video release which you can find HERE. The tech specs for the release include 1080p HD video in the 2.39:1 aspect ratio and DTS-HD 5.1 Master Audio sound. The bonus materials set to be included are listed below.