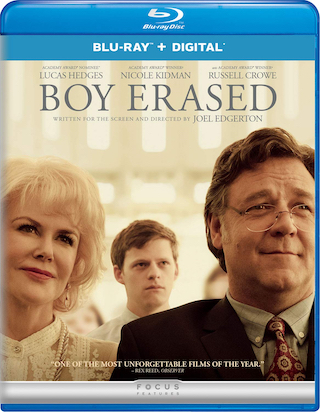 The 2018 Joel Edgerton directed film “Boy Erased“ starring Lucas Hedges is coming to Blu-ray Disc on January 29th, 2019 via Universal. The film co-stars Nicole Kidman, Russell Crowe, Joe Alwyn, Xavier Dolan, Troye Sivan, Cherry Jones, and Flea. Tech specs for the Blu-ray include 1080p video in the 1.85:1 aspect ratio and DTS-HD 5.1 Master Audio sound. The release will include a Digital Copy of the film. You can now find the title on Blu-ray to pre-order over at Amazon. Bonus materials set to be included on the release are listed below.