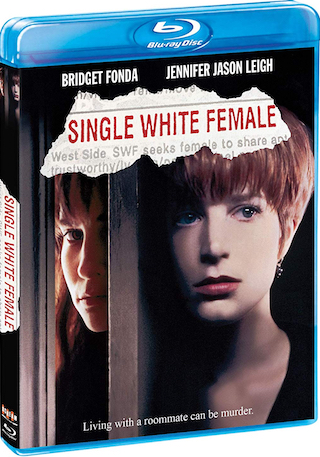 A Film by Barbet Schroeder

“One climax after another after another … a kind of mad artistic zeal to their passionate duel … both Fonda and Leigh pull out all the stops …”
– Roger Ebert
The perfect roommate or a perfect nightmare? An innocent wanted ad – “SWF seeks female to share apt in West 70s; Non-smkr, professional preferred” – opens the door to murderous, psychotic terror in SINGLE WHITE FEMALE. On November 13, 2018, SCREAM FACTORY™ is proud to present SINGLE WHITE FEMALE on Blu-ray. Produced and directed by Barbet Schroeder (Reversal of Fortune, Barfly) and screenplay by Don Roos (The Opposite of Sex), this pulse-pounding psychological thriller stars Bridget Fonda (Lake Placid, Jackie Brown), Jennifer Jason Leigh (White Boy Rick, The Hateful Eight), Steven Weber (Stephen King’s The Shining, 13 Reasons Why), and Peter Friedman (Succession, The Seventh Sign). Available for the first time on Blu-ray, SINGLE WHITE FEMALE contains special bonus content and is a must-have for movie enthusiasts and collectors. Pre-order is available now at ShoutFactory.com
After an unfaithful fiancé leaves her suddenly single, Allison Jones (Fonda) advertises for a roommate to share her spacious apartment. But when the introverted Hedra (Leigh) moves in, she doesn’t just take over Allie’s spare bedroom. She takes over her clothes, her boyfriend … and her identity. An unrelenting thriller from director Barbet Schroeder (Barfly, Reversal Of Fortune), Single White Female boasts terrific performances and stylish suspense to die for. Bring this Blu-ray into your home today (at your own risk).