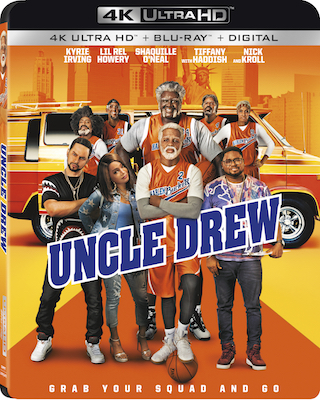 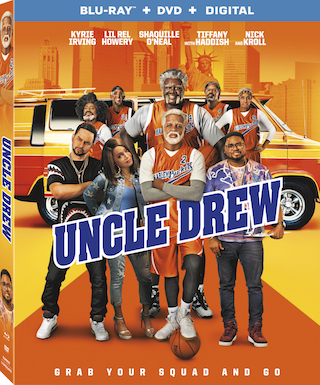 GRAB YOUR SQUAD AND GO

The Hilarious Comedy Dunks on Digital on September 11 and on

After Dax (Lil Rel Howery) loses his street ball team to his archrival (Nick Kroll), he’s desperate for a way to enter the upcoming tournament and win the cash prize. Dax stumbles upon the man, the myth, the legend Uncle Drew (NBA All-Star Kyrie Irving), and draws up a crazy game plan: convince Drew and his old squad (Shaquille O’Neal, Chris Webber, Reggie Miller, Nate Robinson, and Lisa Leslie) to hit the court one more time and prove that septuagenarians can still win the big one!

The Uncle Drew home entertainment release includes special features including 7 deleted scenes, 3 behind-the-scenes featurettes, an animated short, and an audio commentary with director Charles Stone III. Both the 4K Ultra HD Combo Pack and the standard Blu-ray disc will feature Dolby Atmos audio remixed specifically for the home, to place and move audio anywhere in the room, including overhead. Uncle Drew will be available on 4K Ultra HD Combo Pack, Blu-ray Combo Pack, and DVD for the suggested retail price of $42.99, $39.99, and $29.95, respectively.