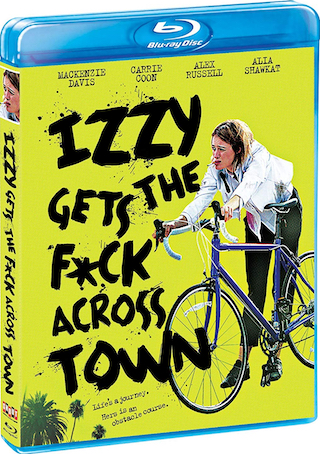 “Papierniak’s film is energetic, jam-packed with talent and has a likable indie throwback feel” -Katie Walsh, LA Times
“Izzy Gets The F*ck Across Town is as delightfully offbeat as the title suggests, with an engaging and heartfelt story. Smartly written with stellar acting and deft direction, this hilarious movie demands to be seen as soon
as possible.”– Film Threat

IZZY GETS THE F*CKACROSS TOWN

A delightfully chaotic look at Los Angeles and the struggles of adulting, Izzy Gets The F*ck Across Town makes its Blu-ray, DVD and Digital debut September 25th, 2018 from Shout! Studios.

The Blu-ray, DVD and iTunes editions of the film also include an audio commentary track with director Christian Papierniak and director of photography Alexandre Naufel, a “Look at the Making of Izzy” behind the scenes featurette, deleted scenes and the theatrical trailer as bonus features. Fans can pre-order their copies now by visiting ShoutFactory.com

In Izzy Gets The F*ck Across Town, riot grrrl rocker and shameless hot mess Izzy wakes up hungover AF to find out that her ex-boyfriend is celebrating his engagement to her ex-best friend tonight at a bougie party across town. Enraged and desperate, Izzy embarks on a frenetic quest across Los Angeles to break up the party in order to fulfill what she believes to be her destiny … before it’s too late.

Watch the official Izzy Gets The F*ck Across Town trailer: