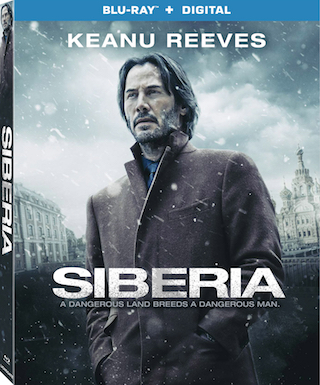 The 2018 Matthew Ross directed film “Siberia“ starring Keanu Reeves is slated for a September 18th release to Blu-ray Disc via Lionsgate. The film received some horrible reviews during its theatrical run. In fact, it carries one of the lowest ratings on Rotten Tomatoes with just 8% (at time of writing this). Yikes! Looks like some critics were maybe quick to rush to judgement on this one? Tech specs for the release include full 1080p HD video in the 2.39:1 aspect ratio and DTS-HD 5.1 MA sound. UPDATE: This title is now available for PRE-ORDER over at Amazon.

Bonus materials slated to be included on the release are amazingly complex, I’ll let you sort through this massive amount of material listed below.

Yep, that much. Amazing studio! Further below, after the break, you’ll find the official announcement for this release.

Keanu Reeves stars in the gripping thriller Siberia, arriving on Blu-ray™ (plus Digital), DVD and Digital September 18 from Lionsgate. This film is currently available On Demand. The film tells the tale of a U.S. diamond merchant who begins an intense love affair with a local woman and finds himself falling deeper into the treacherous world of the diamond trade. The Siberia Blu-ray and DVD will be available for the suggested retail price of $21.99 and $19.98, respectively.

Keanu Reeves delivers the action in this thriller packed with pulse-pounding suspense. In Russia to sell rare jewels to a businessman with underworld connections, U.S. diamond merchant Lucas Hill (Reeves) falls into a torrid affair with Katya (Ana Ularu), a local café owner. When the deal suddenly goes south, Lucas and Katya are caught in a deadly crossfire between the buyer and Russian agents, as Lucas takes up arms in a furious fight to save Katya and himself.

James Gracie Eye in the Sky, The Journey is the Destination

with Veronica Ferres   Salt and Fire, Hector and the Search for Happiness

and Molly Ringwald The Breakfast Club, Pretty in Pink, Tempest

Rating: R for strong sexual content, nudity, language, some violence and drug use.